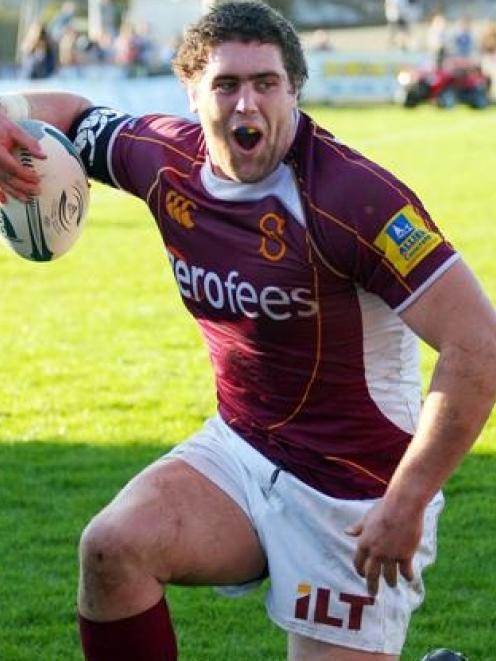 Southland captain Jamie Mackintosh rises to his feet after scoring a try against North Harbour in an Air New Zealand Cup match at Rugby Park last month. Photo from NZPA.
Southland has often been seen as the poor cousin of the Highlanders franchise. But tonight the Stags take on Wellington in an Air New Zealand Cup semifinal, while Otago is out of the running. Rugby writer Steve Hepburn went to Invercargill to see what Southland rugby was doing right.

When Roger Clark stepped into the job as Rugby Southland chief executive 11 years ago the reality of the job soon hit home.

Promising schoolboy star Mils Muliaina left his Southland home for northern fields, on the journey to the All Black jersey and a sparkling rugby career.

"I said right then, 'the rot has got to stop. Not one other kid is going to leave here and go on to be a star'," Clark said.

"We failed with Corey Flynn but apart from him we've lost no-one. We've always produced good rugby players here. So has Otago."

About eight years ago, Southland put together an academy programme to create its own players and put in a retention programme.

Clark said the programmes worked well how but it had taken time.

"But that is because of our size. We don't have the numbers; we are a small community. There are no short answers really."

Tonight, 10 of the run-on side in the Air New Zealand Cup quarterfinal in Wellington are born-and-bred Southlanders. Co-coach David Henderson, who has coached the side for four years with Simon Culhane, said on-field talent was not the sole requirement over player selection.

"It's really important to see how they will fit into the environment, into the culture and the ability on what they can add to the squad."

Clark said when he first arrived players were being hauled in from all around the country to play for the Stags, and that bred no loyalty from players and fans.

"Now we try and get them playing for a club, connecting with the fans."

Henderson said one of the real pleasures was the family atmosphere of the union, and he enjoyed kids and families being allowed into the changing room afterwards.

"It's about not being aloof. We've had guys from our team going down and coaching under-18s, under-16s. And that is where guys can see what they can aspire to."

The team built a gym for themselves, laying down concrete and painting walls, and the union paid for the gear.

Rugby Southland academy manager Peter Skelt said one of the most important things in the set-up was up-and-coming players could see there was a pathway to being a professional player by staying in Southland.

Clark admits the union has enjoyed continuity from the board down, with four members being on the board for more than a decade. Good governance bred good results, he believed.As did having backers with deep financial pockets.

The union was lucky in having two community backers, the Community Trust of Southland and the Invercargill Licensing Trust, which gave the team monetary support, including $1 million-plus help last month.

Clark admitted the union was not flush, with a staff of about 10 and an annual budget of about $4 million.

"The support from the ILT and Community Trust means we are never going to go to NZRU and ask for money. Our community funds our team."

There would be no well-performing rugby and netball teams without the ILT, he said. Clark dismissed the criteria set by the New Zealand Rugby Union, which ranked Southland 12th out of 14 unions in the Air New Zealand Cup.

"Really it should come down to have you got a decent stadium, the performance of the team on the field, development programme, increasing participation and never having to go to the NZRU for a bail-out.

"We have the highest numbers of players per capita. It should be how good your team is. We've shown with 90,000 people here we can produce a quality team."

Clark hoped for Southland to be in the top six over the next five years.

Southland this year averaged crowds of 7500, with a highest crowd of 9000 against Canterbury, when it sold out the main grandstand for the first time for a national provincial game. It had a core following of about 6500 who had been going to games for years.

Clark said people in the south supported the Highlanders but did not go to games at Carisbrook as they were played too late at night.

Henderson, whose twin brother Paul left Southland in the 1980s to play for Otago and became an All Black, said the coaches worked in with Highlanders coach Glenn Moore in what players to attract south.

Getting more Southland than Otago players in the Highlanders was not a big issue for him, he said.

Not many players wanted to come south and they had to be significantly better than the ones already there, Henderson said.

Netball's success in the south had placed greater expectations on the rugby team, but both teams supported each other.

The co-coaching system seemed to work well, but Henderson said there was plenty of lively discussion.

"Simon and I played all our club rugby and rep rugby together. We go hunting together and when we are in the top of the hills the conversation usually comes round the rugby. But when you're coaching you want to have confidence and trust in the guy you are with.

"We're quite relaxed in our approach. But we have disagreements. Plenty of them. It can get quite heated at times. But at the end of the game it is all over. We say things to each other but after the game forget it."

Henderson picks the forwards and Culhane the backs, and the duo will coach again next year.

Henderson said the coaches had tried to introduce a more expansive style since coming on board, and to give everyone a chance to run with the ball.

The side had some bad days this season - a disappointing loss to Canterbury and the failed Ranfurly Shield challenge to Auckland - and refocused a couple of weeks ago, which led to the convincing quarterfinal win over Bay of Plenty.

"We've had games with nine people out injured. Injury and inexperience can hinder you but you just have to get on with it," Henderson said.

Tonight the Southland side will be the underdog.

"The guys are excited about it. There is a real self belief there, playing as a team, not as individuals. But again you have to play for 80min. We can't give them 3min at the end, being 15 points ahead, and then let them clean up."