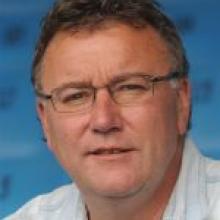 Richard Reid
Progress has been made on the future structure of the Air New Zealand Cup but it appears there is still plenty of work to do before any new competition is unveiled.

The New Zealand Rugby Union called a workshop in Wellington yesterday with representatives of the 14 unions in the Air New Zealand Cup.

The meeting was called after concerns the competition was financially unsustainable in its present form, although it is set to go ahead,with a full round robin among 14 teams, this season.

After yesterday's workshop, the union had come up with some key principles the new competition must meet.

Otago Rugby Football Union chief executive Richard Reid said a few ideas had been tossed around and it was now time to thoroughly assess the ideas, including whether they were financially workable.

He said a range of recommendations had been agreed, but they were confidential. Further details will be revealed next week.

Reid was not ruling out any ideas but the first thing was for officials to do some modelling, to see what worked and what did not.

The New Zealand Rugby Union board will meet next week, and will be kept up to date with the ideas to have come from the workshop.

Reid said it could be possible to have 14 teams in the competition, but it depended on the type of competition structure.

The Otago Rugby Football Union board would also consider its options next week, before the next meeting of the members of the workshop, in four weeks' time, in Wellington.

Otago will open its Air New Zealand Cup campaign with a Ranfurly Shield challenge against Wellington on July 31.