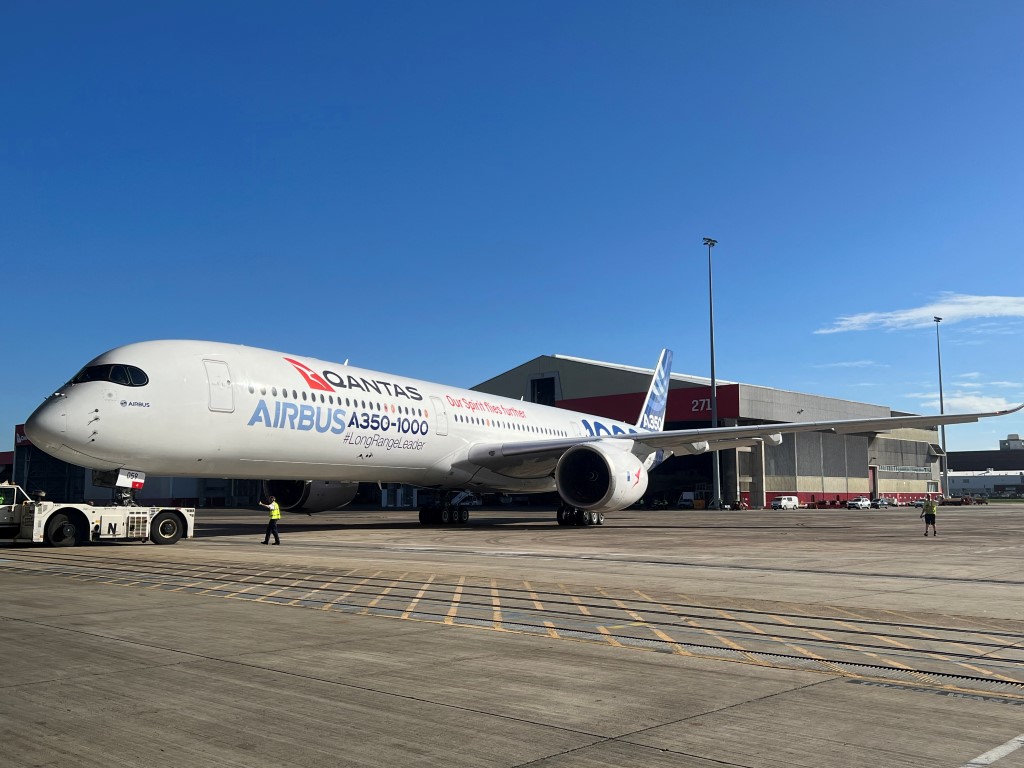 An Airbus A350-1000 test plane arrives at Sydney Airport today. Photo: Reuters
Qantas Airways will fly non-stop from Sydney to London after ordering a dozen special Airbus jets, charging higher fares in a multibillion-dollar bet that fliers will pay a premium to save four hours on the popular route.

To be launched late in 2025, the flights will use A350-1000 planes, specially configured with extra premium seating and reduced overall capacity, to ferry up to 238 passengers in a 20-hour trip - the world's longest direct commercial flight.

Announcing plans for the service on Monday, the loss-making carrier said a strong recovery in the domestic market and signs of an improvement in international flying after the worst of the Covid-19 pandemic had given it the confidence to make a major investment on its future. Qantas forecasts a return to profit in the financial year starting this July.

The order from the European aircraft maker also includes 40 narrow-body A321XLR and A220 jets to start the replacement of Qantas' ageing domestic fleet, with deliveries spread over a decade. The airline did not disclose the value of the Airbus deal, but analysts at Barrenjoey estimated in a client note it would cost at least $A6 billion ($US4.23 billion).

"Since the start of the calendar year, we have seen huge increases in demand," Qantas Chief Executive Alan Joyce told reporters at Sydney Airport, where an Airbus A350-1000 test plane flown from France emblazoned with the Qantas logo and "Our Spirit flies further" was parked in a hangar as a backdrop for the announcement.

Qantas shares surged as much as 5.5% on Monday to the highest level since November after it also said debt levels had fallen to pre-Covid levels faster than the market's expectations.

The A350-1000 order was the culmination of a challenge called "Project Sunrise" set for Airbus and its rival Boeing Co BA.N in 2017 to create aircraft capable of the record-breaking flights.

Airbus was selected as the preferred supplier in late 2019, but Qantas delayed placing an order for two years due to financial challenges during the pandemic.

Airbus Chief Commercial Officer Christian Scherer said the aircraft to be used on the Sydney-London flights would offer more fuel storage than A350-1000s currently in operation with other airlines.

The Qantas planes will carry passengers across four classes and will have around 100 fewer seats than rivals British Airways ICAG.L and Cathay Pacific Airways Ltd 0293.HK use on their A350-1000s. The Australian carrier will dedicate more than 40% of the jets' cabins to premium seating.

CEO Joyce said demand for non-stop flights had grown since the pandemic, when complex travel rules were put in place. Rising fuel costs could be recovered through higher fares, he said, as the airline had done previously on its non-stop Perth-London flights.

In a market update, Qantas said while it expects an underlying operating loss for the financial year ending June 30, 2022, the second half would benefit from improved domestic and international demand, with free cash flow seen rising further in the current quarter.

Barrenjoey analysts forecast Qantas could achieve a 20% revenue premium on the ultra-long haul flights, which Joyce said will also go to New York from late 2025 and possible future destinations like Paris, Chicago and Rio de Janeiro.

Qantas estimated Project Sunrise would have an internal rate of return of around 15%.