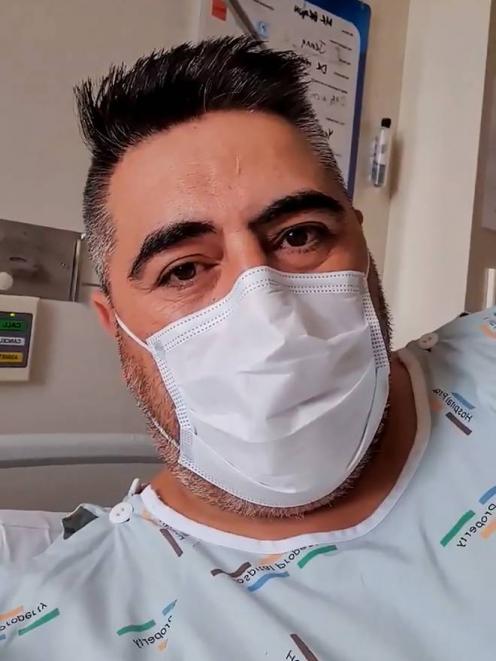 Geoff Muliaga Brown. Photo: Supplied via NZ Herald
It's been nearly two months since Geoff Muliaga Brown was deemed recovered from Covid-19 - he's even been retested. But he still finds himself on the receiving end of abuse.

Kiwis who've had Covid-19 say they've been treated like "lepers", abused on social media, and even filmed in public - and experts are calling for the stigma to end.

This week, director general of health Dr Ashley Bloomfield said he had been contacted by people who had recovered but were struggling to be accepted.

Muliaga Brown is tied to the cluster at Marist College, which his daughter attends, and which experienced the country's second largest outbreak with 96 confirmed and probable cases.

Given he's been in media, Muliaga Brown said people now recognised him, and it fuelled a lot of the abuse he received.

"I've been dealing with that everyday. After I'd spent about 21 days out of hospital, and completely recovered, I was in the supermarket with my daughter and she saw a person filming me with their phone.

"Other times I've been waiting in line, and somebody has asked if anyone has had it, and I say, 'Yes', and everyone just steps away.

"Since sharing my story I've also had lots of calls and messages from people who've had [Covid-19] and are struggling, [and] don't want to speak out about it.

"I just encourage people to be understanding, nobody asked for Covid-19."

He said the peak of the stigma was around the end of March and April, when the number of cases was still growing.

"I still get all sorts though, lots of jokes, but many just avoid handshakes or hugs."

Muliaga Brown said he fell "severely ill" on March 20, about a week after he was an MC at an event at the Catholic girls' school.

He previously shared his experience of being twice turned away before testing positive and needing to be hospitalised, in a bid to raise awareness in the early days of the virus in New Zealand.

An Auckland woman who contracted the virus told the New Zealand Herald the abuse - mostly online - she experienced was "horrible".

"You really learned if you had a hard shell or not," said the woman, who only spoke on the condition of anonymity.

"I could handle it, but my children, they were treated like lepers."

In person she found people were more polite and fine towards her, but she found it uncomfortable how the contact-tracing sign-in forced her to have to explain it every time she went somewhere.

He and his girlfriend, who had also just returned from overseas, went straight into self-isolation together on the West Coast of the South Island before they knew they had the virus, and without experiencing any symptoms.

It was only when someone Murray had travelled with tested positive that they went to get tested.

"We would have self-isolated anyway, but it was cool that at the time the Government advice was for us to [self-isolate], and that there was never any chance of us being able to infect our families and friends, and potentially people much more vulnerable than us."

They only experienced mild symptoms - Murray describing a headache as the worst effect.

Since having the virus, Murray had been open about his experience and found people generally were considerate.

"You do feel a little alienated, like the minority, but it's just kind of interesting - I've definitely answered the same questions over and over. At the end of the day it's just really lucky we didn't have any really serious symptoms and didn't infect any others."

"On the one hand it makes sense emotionally, with everything going on and all the press and publicity about the dangers, and experiencing the lockdown.

"But this is where people need to pause, and continue to listen to what the science tells us, that once people have recovered they are not contagious.

"So just be considerate. When we are anxious, whether about telling somebody or meeting somebody who has had it, there is a tendency for it to overwhelm our thinking and act out of fear.

"That is a really good opportunity to pause. It is okay to feel anxious or afraid, but we don't have to be ruled by it.

"We can choose how to respond."

Bloomfield had a message for Kiwis this week: "Please be kind. Make them feel part of our society. There is no stigma around having had Covid-19."