What created this weekend's monster high? 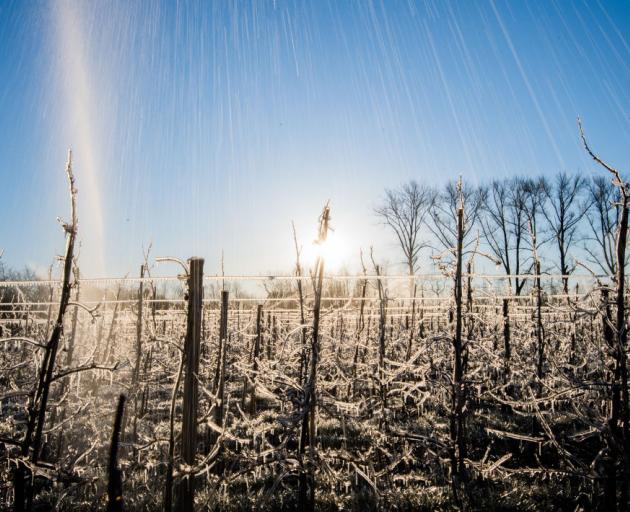 Photo: File
It's set to park itself over the South Island and potentially plunge weekend temperatures down to record lows. So what's created this incoming monster high-pressure system?

We can think of atmospheric pressure as the force of air pulled towards the Earth by gravity – and a high-pressure system has greater pressure at its centre than the areas around it.

Winds tend to blow away from high pressure and swirl in the opposite direction from a low pressure system. South of the equator, they rotate counter-clockwise and create what we better know as anticyclonic flow, typically creating fine, settled weather.

What's in store for Sunday?
Between Thursday and Saturday front sweeps NZ, with cold air behind it, but what comes next? Image shows 6 main scenarios possible from 50+ weather models. Likely a big high, but also the risk of a localised lingering trough. https://t.co/Yjbq0jxdqz^TA pic.twitter.com/MjotFizWiN

Air from higher in the atmosphere sinks down to fill the space left as air is blown outward – and on a weather map, this appears as an "H", or a large glob with other rings of pressure around it.

But the mass currently sitting due south of Australia, and forecast to track toward New Zealand, isn't just any glob, but one of the strongest highs currently on the planet.

A clear sky sunrise over Hanmer Springs means sub zero morning temps. This will be the norm for elevated valleys now we must all accept it's winter! The coolest temps this week are expected to be overnight Saturday. For more on what makes a cold night: https://t.co/V9TMMHVA6b ^AC pic.twitter.com/fzcGGGL1yC

This system's record potential has meteorologists intensely interested in how it shapes up when it peaks this weekend.

"It's going to be moving south of Australia over the next day or so, and then it will move over Tasmania as we go from Thursday and Friday, before reaching the southern Tasman Sea late Friday," Niwa meteorologist Ben Noll said.

"After that, it moves slowly over the South Island and then centres over it Saturday night – so on that night and Sunday morning, we can expect to see the peak of the pressure."

Noll said another fascinating aspect of the weekend's weather set-up was that another area of high pressure, presently anchored over the North Island, would combine with coming system to create a single, much more powerful one.

Ocean temperatures in the equatorial Pacific continue to cool, increasing the chance for La Niña conditions later this year 📉

This could result in a change in our weather patterns during next spring & summer.

Niwa is currently forecasting lows of -1C for Christchurch in the early hours of Sunday, along with -3 deg C at Tekapo and Ashburton, -5 deg C at Alexandra, -1 deg C at Tekapo, and 0 deg C at Queenstown.

But guidance suggested temperatures could drop below -10 deg C in some southern spots around midnight on Saturday – and perhaps even colder.

"As for those really cold values, it all depends on what happens at our climate stations – it may well be a case that a pocket or a valley gets as cold as -15C.

"Whether that can be captured by one of our climate stations is a different question."

In the north, the night could be slightly warmer – but not much – with lows of 9 deg C, 7 deg C, 4 deg C and 6 deg C forecast for Whangārei, Auckland, Hamilton and Tauranga respectively.

More certain was the prospect of heavy frost across the interior of the South Island, and perhaps around its coasts.

Noll said the system could be thought of as a vast dome of density in the atmosphere.

"A colder air parcel is denser than a warmer one, which means it sinks, and that's why we'd expect the coldest temperatures to occur in those low-lying valleys in the South Island."

He added that a massive high-pressure system like this one typically couldn't come without a similarly sizeable low-pressure system – and such a mass was due to strengthen deep below New Zealand, over the Southern Ocean.

"Usually, when you have a really big area of high pressure, it's balanced out by a strong area of low pressure. Essentially trying to mix out temperature gradients is kind of the premise of pressure systems," he explained.

"So the equal and opposite force that is allowing this high to become so strong is an area of low pressure that is forecast to develop near 60 degrees south latitude, just as our high is most powerful over New Zealand."

At its strongest, the big low was expected to grow as deep or low as 954 millibars.

More broadly, the set-up was being indirectly influenced by something called the Madden-Julian oscillation (MJO) - the largest element of the intra-seasonal variability in the tropical atmosphere.

The MJO was known for driving big ridges of pressure in one place and big troughs in another – and right now, it was most active over Africa, well away from the New Zealand region.

"In our neck of the woods, the subtropical tap is turned off," Noll said.

"As it's currently active well to the west of our area – or our line of longitude here in New Zealand – we wouldn't expect depressions to come down from the north."

Past records showed that, when the MJO was in a phase as it is now, this didn't create the ingredients for above-normal level of rainfall – and instead tended to favour large areas of high-pressure systems over our neighbourhood in the southwest Pacific.

Looking forward, Niwa expected a winter season with no one big climate driver at the steering wheel – but it was growing increasingly likely that a La Nina system could begin to emerge in spring, bringing the prospect of much-needed rainfall for the drought-parched north.