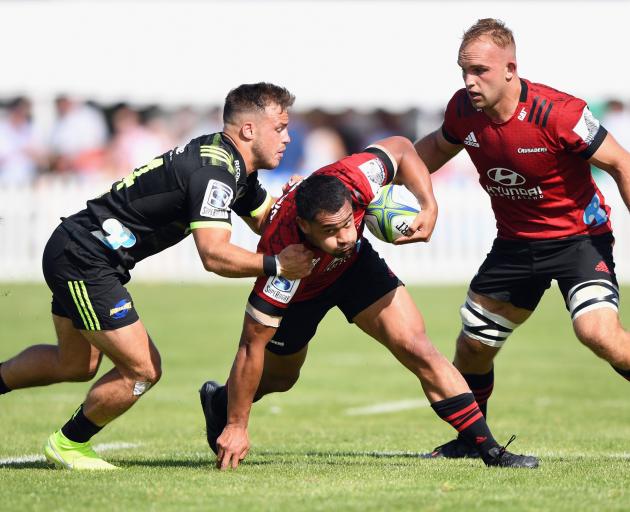 Fasi Fuatai of the Crusaders is tackled by Wes Goosen of the Hurricanes during the Super Rugby pre-season match between the Crusaders and the Hurricanes at the Showgrounds in Ashburton. Photo: Getty Images
With Super Rugby starting at the end of the month, plenty of questions will be raised over the coming weeks as the teams grow accustomed to playing on hard, dry surfaces in the heat of summer.

None of those early questions will be directed towards whether the new-look Crusaders can cope with the loss of veteran players.

The reigning champions provided plenty of early indications they'll be more than ready to compete for an unprecedented fourth title in a row, with a 42-19 demolition of the Hurricanes in Ashburton on Saturday afternoon.

The Crusaders were slow out of the blocks. A sluggish start saw the Hurricanes break out to a 10-0 lead through tries to loose forward Du'Plessis Kirifi and midfielder Vince Aso.

Soon after Aso's try, Crusaders midfielder Brayden Ennor burst through a couple of attempted tackles to scoot away for a try of his own, sparking the Crusaders attack.

There was plenty of free-running football on display, which will likely be the case in the coming months as teams look to tired one another out in the heat.

The opening 10 minutes were really all the Hurricanes had to write home about, as they faced a 28-12 deficit at half-time.

Both sides fielding fresh teams for the second half didn't change things, although the Hurricanes did stem the flow from the opening 19 minutes of the half.

After winger Fa'asiu Fuatai crashed over for the Crusaders in the 59th minute, the lead was near insurmountable. A late try to Hurricanes new recruit Kobus van Wyk gave the Hurricanes a faint hope, but the Crusaders proved to be too good, with a try to Sione Havili at the buzzer sealing an emphatic win.

Despite the result, there were some positives to take out of it for the Hurricanes. Vaea Fifita was damaging on defence in a first-half cameo, while the forward pack showed a solid display and their defence of the lineout drive was strong.

The Crusaders will have another pre-season hit out next week, travelling to Wanaka to face the highlanders, while the Hurricanes face the Blues next week.