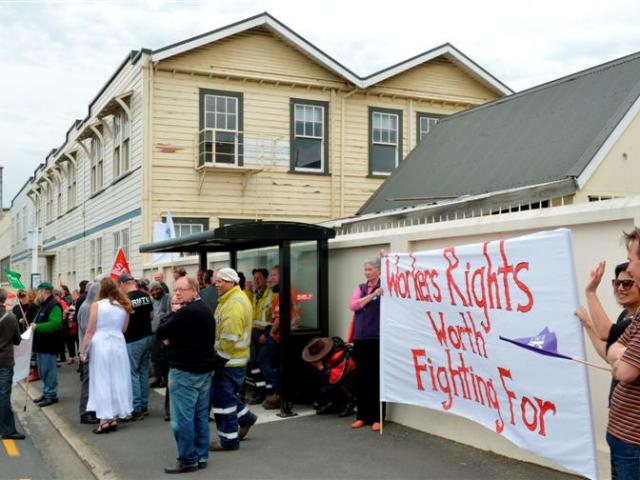 Members of the now defunct Hillside working party are willing to join forces if or when the need arises in the future, chairman John Christie says.

Nearly 90 workers face redundancy, with the news only part of Kiwirail's Hillside Workshop in Dunedin has been sold.

The Labour Party has committed to re-establishing the Hillside workshops in Dunedin if it forms the next Government.

Hillside Engineering Workshops staff who missed out on the contract to manufacture new wagons are being asked to repair faulty Chinese-made wagons.

Dunedin South Labour MP Clare Curran has come out swinging today after news that the brakes on 500 Chinese-built freight wagons ordered by KiwiRail had to be replaced before they could hit the tracks last year.

Dunedin's city leaders have officially put up a unified front to do whatever it takes to smoothly roll through the sale of Hillside Engineering.

KiwiRail is seeking expressions of interest for the sale of Dunedin's Hillside Workshops.

Despite KiwiRail seeking expressions of interest for the sale of Dunedin's Hillside Engineering, the city's business community and the Rail and Maritime Transport Union are confident Hillside can survive.

Hillside is to be sold. While it is heartening to observe the optimism at the news emanating from parties connected to, and associated with, the long-standing South Dunedin heavy engineering business, only time will tell whether there is any realistic basis for it; and whether, several months hence, the 123 or so remaining skilled staff will still have employment, and Dunedin a potentially key operation in its cluster of remaining engineering companies.

A petition to save Hillside jobs has been rejected by a parliamentary select committee.

Kiwirail is seeking to rehire six rail engineers to work at its Hillside Workshops in South Dunedin on fixed-term contracts.

KiwiRail's controversial decision to have its new freight wagons made in China may have backfired.

Labour leader Phil Goff was in heartland territory yesterday as he visited the Hillside Engineering workshops in South Dunedin.

Workplace relations at Hillside Engineering appear to have soured further after workers passed a vote of no confidence in their KiwiRail managers at a union meeting yesterday morning.
Workers at Dunedin's Hillside Engineering workshops hope to benefit from a Spanish company's $500 million deal to build electric trains for Auckland.
The union behind redundant Hillside rail workers has renewed calls for Parliament to address the concerns of almost 14,000 people who want to keep rail-manufacturing jobs in New Zealand.
A parliamentary select committee is scheduled to consider a petition from almost 14,000 mainly Dunedin-based signatories, as last-ditch efforts to retain engineering jobs at the Hillside workshops continue.

A round of proposed job cuts at KiwiRail's Woburn, Lower Hutt, workshops has been halted after a group resignation of workers pre-empted it.