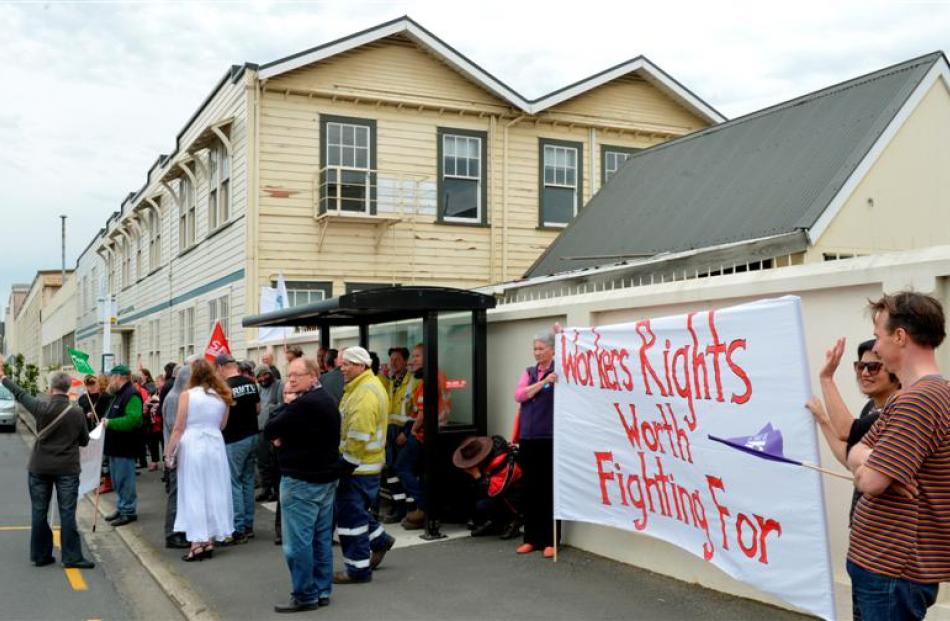 Past and present Hillside workers and supporters gather outside the workshops' main gates yesterday, on the first anniversary of the South Dunedin facility's closure by KiwiRail. 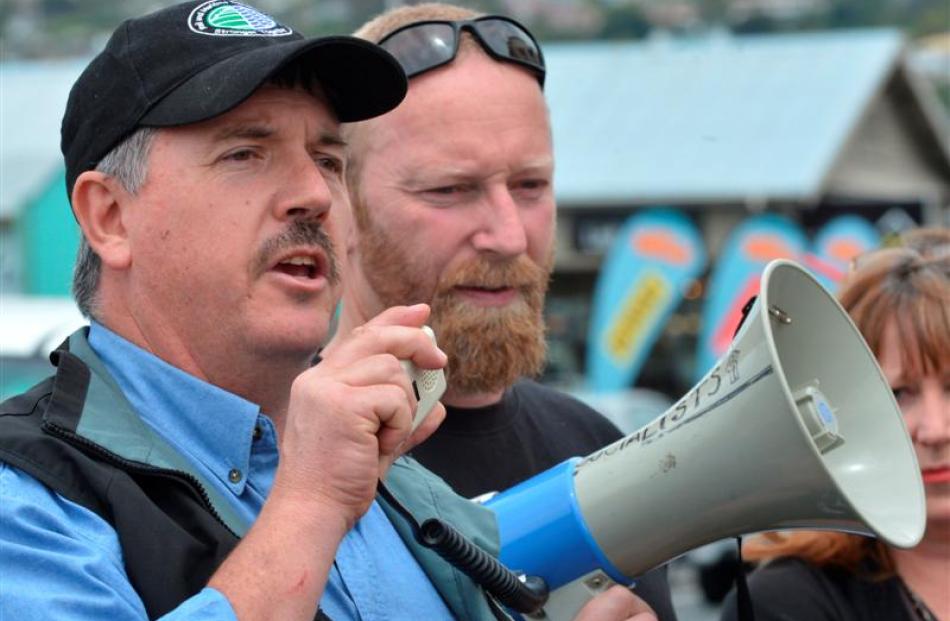 Redundant Hillside worker Stuart Johnstone, in his role as a Rail and Maritime Transport Union organiser, addresses a crowd outside the South Dunedin workshops yesterday, alongside fellow past Hillside employee Dave Kearns. Photos by Gerard O'Brien.

The message was clear from proud past and present workshop staff in South Dunedin yesterday.

About 60 people gathered at the Hillside Engineering Workshops main gates in Hillside Rd from 12.30pm to mark the first anniversary of the facility's closure.

The ''Hillside Not Forgotten'' rally was organised by the Rail and Maritime Transport Union (RMTU) for those made redundant last year to reunite.

It was a chance to acknowledge the facility's long history, its importance to Dunedin's economy, and those who helped build New Zealand's rail system. The rally also gave union representatives the chance to vent about government decisions to contract manufacturing work outside New Zealand.

Dunedin South Labour MP Clare Curran spoke about the party's promise to reopen Hillside if elected to power, and many of those present denounced Prime Minister John Key and Economic Development Minister Steven Joyce as those responsible for Hillside's demise.

''We must not give up hope that Hillside will one day again make and repair rail carriages and locomotives,'' Ms Curran said.

''This is not a romantic pipe dream.

''Rail has had a renaissance around the world.''

Former Hillside worker Stuart Johnstone addressed the crowd in his new role as an RMTU organiser.

Mr Johnstone moved his family to Auckland after being made redundant from Hillside and was surprised to learn the struggle of Hillside workers had made an impact nationwide.

''It really is amazing how many people know the whole story,'' he said.

''Hillside has become the symbol for the 40,000 job losses in manufacturing throughout the country.''

He said the past 12 months had been a ''mixed bag'' for redundant Hillside workers.

Some moved to Auckland and other New Zealand cities for KiwiRail jobs, while others relocated their families to Australia for better work prospects.

Some stayed in Dunedin, predominantly for family reasons, and looked for work outside their skill set.

That was particularly hard, especially for those who drove past Hillside daily and were reminded of work in their preferred trade, Mr Johnstone said.

''People have had to take whatever jobs they can find. It is still very raw for some people.''

Some workers had not found employment since being made redundant, although it was hard to know how many, Mr Johnstone said.

Staff employed by Bradken to work the Hillside foundry were doing well, and KiwiRail still had employees operating the heavy lift capability inside the workshops, he said.

Also speaking at the rally were former Hillside workers Dave Kearns and Jim Kelly, as well as Andrew Tait, of the International Socialist Organisation, Mana Party and Engineering, Printing and Manufacturing Union.