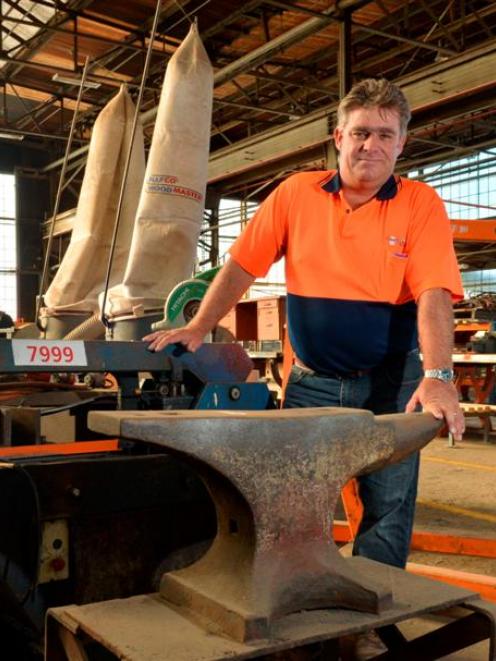 Alastair Beer Auctions owner Alastair Beer prepares yesterday for the auction at Hillside Engineering Workshops today and tomorrow. Photo by Gerard O'Brien.
Looking for a robotic welder?How about a railway locomotive wheel-cutter? Or a prototype railway wagon? It comes without wheels, but if you had a railway locomotive wheel-cutter, you could make your own.

There is something for everyone who likes heavy metal at the Hillside Engineering Workshops plant and equipment auction starting today.

''It's all specialised railway equipment, so it is a bit different,'' Alastair Beer Auctions owner Alastair Beer, of Tauranga, said yesterday.

''There's a lot of good engineering gear. A lot of it's quite old and pretty specialised, but it's surprising what they do still use today,'' Mr Beer said.

Eight staff from the Tauranga business and 12 Student Job Search workers had spent the past three weeks preparing the 1250 auction lots.

''Anything left after the auction will be scrapped for its metal content,'' Mr Beer said.

The auction follows the closure of Hillside last year, with the loss of 90 jobs, and its part sale to Australian firm Bradken in November.

The New Zealand Railways Department founded the workshops in 1901 and, by the 1930s, it was the largest railway workshop in the South Island, covering 6.5ha and employing 800 staff.