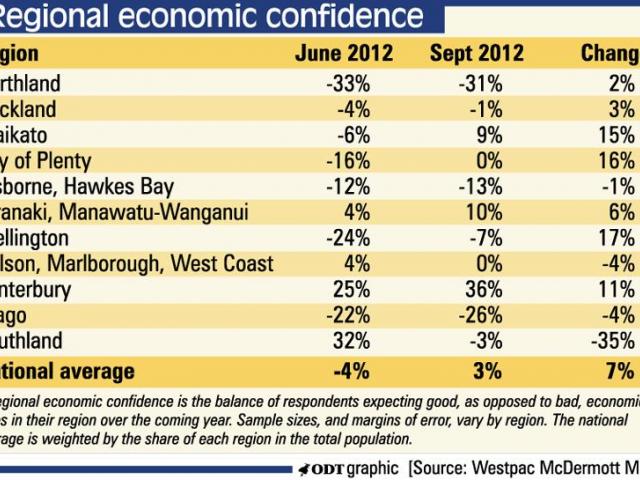 Otago and Southland households are among the gloomiest in the nation with job cuts and ongoing negativity about the delayed start of the reconstruction of Christchurch contributing to the regional pessimism.

Kiwirail management will meet staff in Dunedin today to deliver bad news about job cuts in its infrastructure and engineering division.
No further job losses are expected from the first of several major reviews of Dunedin City Council department operations aimed at increasing efficiencies and cutting costs.

Dunedin has been dealt another blow with confirmation Delta plans to make up to 30 workers in the city redundant, Dunedin Mayor Dave Cull says.
The jobs of 31 workers at the Milburn wood processing plant are likely to go, with City Forests announcing plans to mothball the facility later this year.

Up to 12 jobs may be lost at Port Otago as the company looks to reduce its workforce to meet an expected drop in the container trade.

Alliance Group is proposing to close its Sockburn plant in Christchurch at the end of the 2012 processing season, affecting about 250 jobs.

Up to 34 jobs could be affected at the Otago conservancy office in Dunedin if the Department of Conservation adopts a cost-cutting proposal, sources say.

The Otago conservancy office in Dunedin will be affected by the Department of Conservation's plans to cut 100 jobs in the organisation, but it is not yet known to what extent.
More staff at a University of Otago-owned company will lose their jobs as the Government's capped tertiary funding environment continues to bite.

Meat industry cool storage company Polarcold is considering mothballing one of its two Dunedin plants and laying off up to half its staff in the wake of plummeting stock numbers - a problem further compounded by this week's storm.

A group of Dunedin women artists has launched a second secret "art attack" at the University of Otago College of Education.

Almost 10 jobs are likely to be axed when two departments at the University of Otago's School of Business are merged, a draft merger proposal says.
The Southern District Health Board is shedding six full-time jobs in its planning and funding, and finance divisions.

Nine University of Otago staff have lost their jobs after reviews in two service departments.

Telecom has axed 200 management jobs from its workforce in the past three months and warns further cuts cannot be ruled out as it seeks to claw back costs.
Principals share union concerns job losses at the University of Otago College of Education may lead to poorer-quality teacher trainee programmes and graduates less prepared for the classroom, the president of the Otago Primary Principals Association, Jenny Clark, says.

Yahoo Inc. will lay off nearly 700 workers after getting off to a bumpy start under a tough-talking new boss who has promised to engineer a long-awaited turnaround at one of the Internet's best-known franchises.

The Government needed to take much more interest in companies axing jobs in New Zealand in favour of lower labour costs offshore, Labour Party communications spokeswoman Clare Curran says.
Union officials have had no guarantees the University of Otago will release a confidential restructuring proposal report which could mean redundancies.