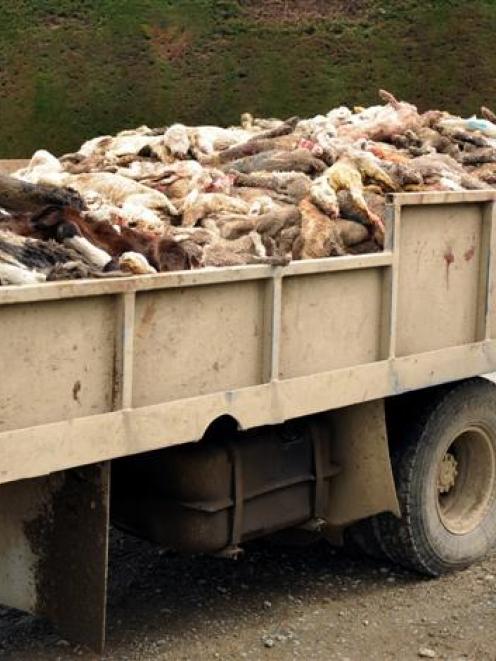 The loss of stock from this week's storm is in addition to a large decline in stock numbers. Ryan McCallum (above) loads dead lambs near Winton, in Southland. Photo by Stephen Jaquiery.
Meat industry cool storage company Polarcold is considering mothballing one of its two Dunedin plants and laying off up to half its staff in the wake of plummeting stock numbers - a problem further compounded by this week's storm.

Southern stock losses to farmers this week are already being estimated in the tens of thousands and millions of dollars as lambs and calves succumb to the cold.

Possibly up to eight of Polarcold's 16 Dunedin staff, at sites in French St and Kaikorai Valley, could be made redundant once consultation with staff is concluded next month, Polarcold's Timaru-based general manager Kevin Cahill confirmed yesterday.

"It [declining stock numbers] is a disaster at the moment; and now the snow. We're looking at having to retire capacity, up to about 50%," Mr Cahill said.

Annual tonnage through Dunedin was likely to decline 50% from 5000 tonnes to 2500 tonnes, but its cool storage facilities at Silverstream near Mosgiel were not affected in any way, he said.

The problem with the large fall in stock numbers was specific to Otago and Southland and would affect only one of Polarcold's eight South Island sites, and none of its sister-company's four North Island sites.

Mr Cahill said before this week's storm the company had not forecast any improvement likely in stock numbers, with a 50% decline in venison, a "similar" downturn in sheep and otherwise "flat" beef numbers expected through the cool stores.

"This is isolated [to Otago and Southland].

"If we saw an improvement likely in the next few months then we would sit tight," Mr Cahill said.

Beef and Lamb New Zealand said earlier in the month that there was still good demand for these products nationally and predicted export receipts down 1.6% at $4.7 billion.

While ewe breeding numbers had stabilised for lambing, down only 0.6%, export lamb kills nationally have fallen by four million, from 25.4 million in 2005-06 to a forecast 21.4 million this season.

"What's happening to us here is a reflection on the meat industry in general," Mr Cahill said.

Southland sheep and beef farmer and Federated Farmers' adverse events spokesman David Rose said the storm appeared set to surpass the economic loss to agriculture caused by the Canterbury earthquake, and he was expecting a "massive loss" in the South for the 2010-11 season.

"Sheep and beef farmers have spent the last 360 days preparing to have their stock in the best possible condition to lamb, only for all that effort to be undone by five days of sustained storms," Mr Rose said in a statement.