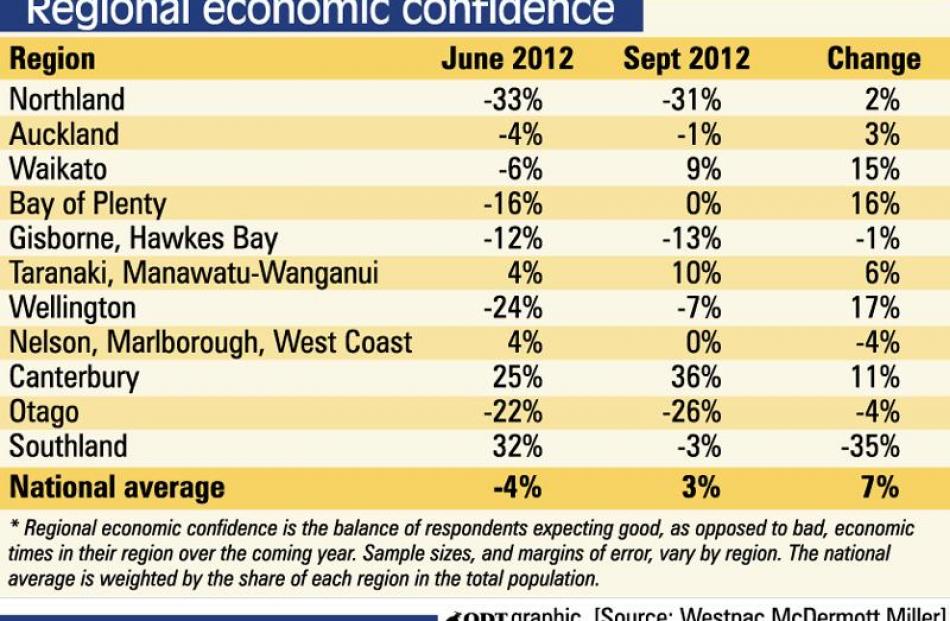 Otago and Southland households are among the gloomiest in the nation with job cuts and ongoing negativity about the delayed start of the reconstruction of Christchurch contributing to the regional pessimism.

The Westpac regional economic confidence index showed Canterbury surging ahead, leading the rest of the regions by a country mile in the three months ended September.

However, economic confidence in Otago has fallen further into pessimism, with a net -26% of households expecting mainly bad economic times over the year ahead. The level of pessimism is the highest since 2008.

"Government cutbacks may be affecting health and education providers, which are a big part of the Otago economy."

Southland's regional economic confidence had plunged from the highest in the country to outright pessimism. In June, Southland's index reading was a net 32% of households feeling positive. That plunged to -3% in September, a 35-point turnaround. Confidence was the lowest since mid-2009.

Otago-Southland Employers Association chief executive John Scandrett said the disappointing economic activity confidence levels spinning out of the survey aligned "fairly and squarely" with most of the outcomes the region had been forced to digest when manufacturing and service sector performance had been evaluated.

"There are most certainly still wide tourism, retail and construction activity levels that have been in the 'low and slow category' for many months.

"Across the local manufacturing scene, we have seen some pretty solid reversals on agribusiness returns. Then, against this backdrop, when we are presented with hard-hitting negative issues such as the recent Tiwai downsizing potential, the negativity scale can easily be tipped further into contraction," he said.

Too many people and businesses had been waiting too long to see if Christchurch would present new opportunities. So far that had not been seen, Mr Scandrett said.

Otago Chamber of Commerce chief executive John Christie was surprised by the low Otago reading, saying it did not reflect the mood of business.

But he understood that ongoing bad news about job losses and restructuring created uncertainty in a community. Recent news of job losses at Dunedin City Council-owned Delta and the possible closing of Government-owned Hillside Workshops had not helped economic confidence for households.

"The seesaw on this is finely balanced. There are job losses but there are also jobs being created just as fast. It is getting people to feel confident about the future that is the key."

As to how that could happen, Mr Christie said it was more than just "talking up" the economy.

Any progress had to be based on a sound foundation.

The release of the regional economic plan had set goals to achieve but it was up to businesses to create the jobs. Most jobs in the region were created from the small to medium-sized enterprises (SMEs).

"The last 12 months had been the toughest we have seen in decades and it goes across all sectors. There is a flow-on from the downturn in Christchurch, lower overseas student numbers, lower tourism numbers and manufacturers and service industries struggling. We have lost opportunities and we have had no contribution from government money, unlike Christchurch."

Opportunities would come from the reconstruction of Christchurch and that would be good for the local economy and job growth. But that did not mean people would need to leave Dunedin to make the most of the opportunities. Completing work here and shipping products to Canterbury would have a large impact on the local economy, Mr Christie said.

Mr Delbruck said the mixed picture of economic confidence was a reflection of where New Zealand was placed in the global economic cycle. The downturn had deepened over the past three months but the world's major central banks had now also pledged aggressive policy support, laying the groundwork for conditions to improve over the coming year.

Concerns around supplies had helped support global prices for some regions' export commodities - notably oil and dairy, he said.

Lacklustre confidence outside Canterbury was also a reminder of the mixed impact rebuilding Christchurch was likely to have elsewhere. Reconstruction would create jobs but it would also increasingly divert human and financial resources from other regions, Mr Delbruck said.

The survey was conducted between September 1 and 9. The sample size was 1553. 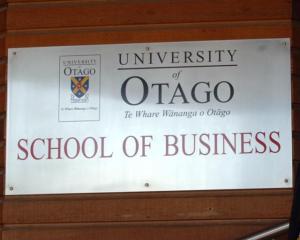