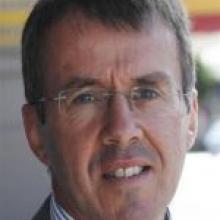 Grant Cuff
Alliance Group is proposing to close its Sockburn plant in Christchurch at the end of the 2012 processing season, affecting about 250 jobs.

Not only was it a big blow for employees but also for the region, reeling from the earthquakes.

After the announcement, he was approached by workers whose houses were "smashed" and who were waiting for payouts, he said.

In a statement yesterday, Alliance chief executive Grant Cuff said the company was starting a consultation process with its staff and unions.

The plant had not operated profitably in recent years and the company had "explored a number of options" to address that.

It was proposed to transfer beef processing to its Mataura and Pukeuri plants where capacity was being expanded.

Venison processing would be transferred to a new facility to be built at the Smithfield plant in Timaru. The Sockburn plant also processed pigs on behalf of Porkcorp New Zealand, which was making alternative arrangements with Ashburton Meat Processors.

The proposal would reduce fixed overhead costs, increase the company's overall processing capacity and enhance profitability. It was expected the consultation process would take about four weeks.

If confirmed, the company would offer its 250 employees the opportunity to transfer to jobs at other Alliance plants where practicable.

Financial assistance would be provided.

For employees not wishing to transfer, or where a suitable position was not available, redundancy compensation would be paid in accordance with the appropriate agreements.

Employees would have several months to consider their alternatives and make an informed decision, Mr Cuff said.

There was no connection between the Canterbury quakes and the proposal to close the plant, he said.

The plant itself was not damaged in the quakes but provision of services was disrupted by infrastructural damage.

At a shareholders and suppliers meeting last month in Oamaru, Alliance chairman Owen Poole said processing of venison and beef was seriously compromised and the company was considering its options to ensure processing capacity was restored to previous levels.

Mr Watt believed there would be opportunities for employees to transfer but the nearest Alliance plants were Smithfield and Pukeuri and that was a "big call" for those with families to shift.

The proposal to close at the end of next season posed a difficulty, because employees needed to decide whether to hang on under the company's offer and get redundancy at the end of that season, or take jobs as they came up and forgo redundancy.

Mr Watt said he was "distinctly unhappy" with that. The union believed if people found other jobs in the interim, they should be able to receive redundancy compensation.

The union would be raising that issue with the company, he said.

There were employees with mortgages and families; and with houses that needed fixing, he said.