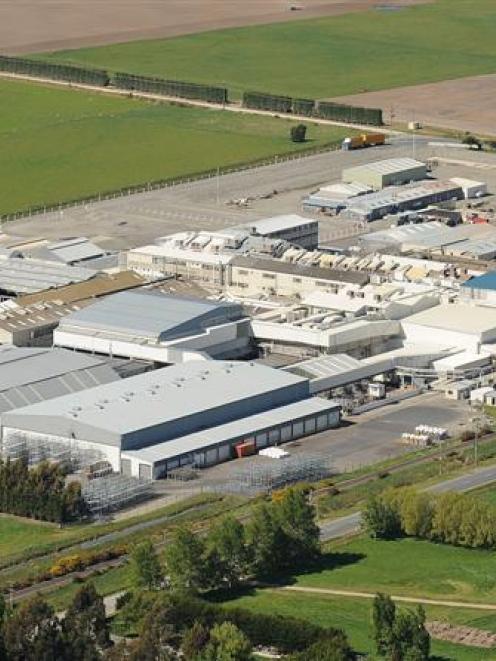 The Pukeuri plant. Photo by Stephen Jaquiery.
More than 200 meat workers at the Alliance Group's Pukeuri meat works, who were laid off temporarily last week when the plant's exports to China were halted, still have no idea when they can return to work.

However, suggestions to ease workers' financial troubles have been put to the company.

The Otago Daily Times understands the plant will be audited this week and it is hoped the Ministry of Primary Industries will promptly approve the resumption of exporting to China, which will mean processing can start within two weeks.

Workers were sent home when the plant's certification allowing exports to China was temporarily suspended because cartons in one container-load of meat were incorrectly labelled.

''We don't know if some people will be able to secure temporary work for themselves. I do know that those meat workers would have come out of work that they would previously have organised for themselves to start work at the works and probably lost that opportunity, so that's put a severe impact on them.''

However, Mr Carran said proposals to help workers had been put to plant officials.

''Through the plant we have made a few suggestions to the company, which we are just waiting to hear back on.

''We would like to think that the company would be thinking about the situation and considering the upheaval that it has created for people to secure some temporary off-season employment.''

Plant officials had suggested some steps to ''buffer'' the financial impact faced by workers in the meantime, but the implementation of these would be subject to the employer.

''It is something for the CEO to consider, put it that way. Hopefully we will hear back in a few days' time.''

Under the terms of the union's collective agreement, Alliance Group is understood to be required to pay a minimum weekly provision to stood-down workers of $525 gross, unless it terminated their employment. But that agreement only applied when workers were actively engaged in work at the plant.

Alliance's general manager of processing Kerry Steven said the company recognised it was an upsetting time for employees.

''We are working hard to resolve the situation as quickly as possible so we can recall employees and processing can recommence.''