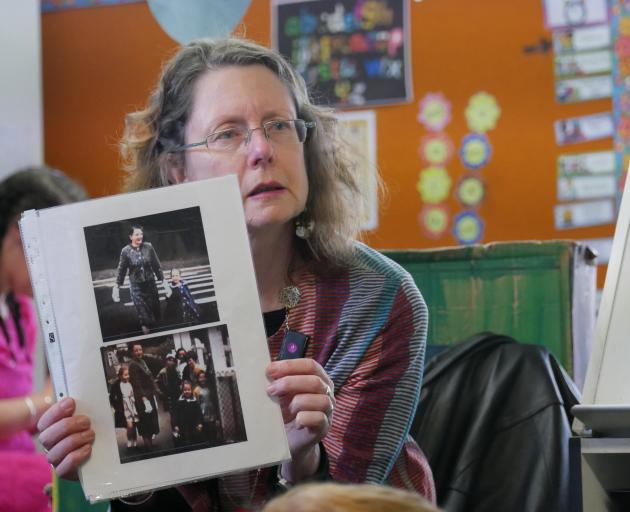 Poet Jenny Powell shows Tainui School pupils photographs of her first day at the school as a child. PHOTOS: JESSICA WILSON
What happened to the teddy bear’s fur?

That is the question Tainui School pupils pondered when asked by poet Jenny Powell.

The workshop was also held at other South Dunedin schools, including St Bernadette’s and Carisbrook.

Her session at Tainui was extra special, as Ms Powell used to be a pupil there.

She showed pupils photos of her and her mother taken on her first day of school. 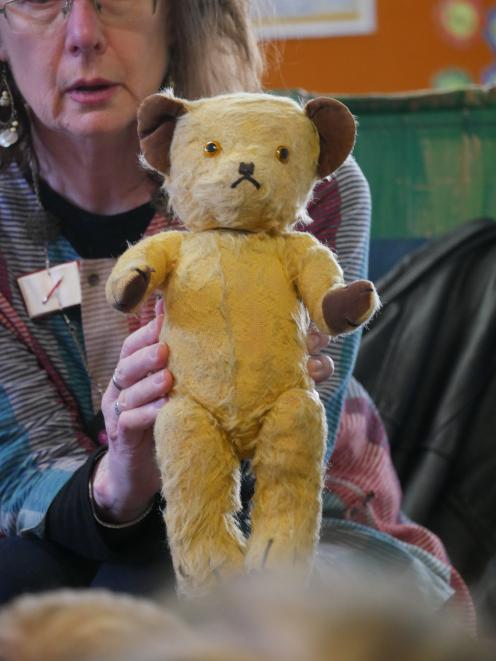 Jenny Powell’s teddy bear was the subject of a poem she wrote with the help of Tainui School pupils on Friday.
She then read two poems to the class — Stop rain, stop and Small dog — before showing the pupils a teddy bear she got when she was a child.

When talking about its worn-down fur, the pupils suggested it had been blown off, maybe there was too much fur to begin with, it might have been brushed off, or it was cuddled too much.

Ms Powell took note of the children’s and will turn them into a poem for the start of next term.

Unofficially dubbed the ‘‘Dunedin Unesco City of Literature South D Poet Lorikeet’’, Ms Powell wore a necklace with a parrot and books on it.

‘‘I wear this necklace when I am visiting schools to do some writing,’’ she said.

The workshop programme is a partnership between Unesco and Read, Share, Grow, the library campaign in South Dunedin.