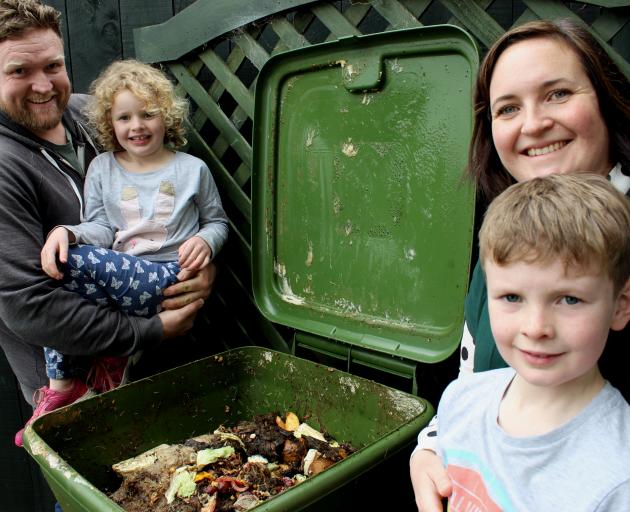 Belleknowes family Brendan Warren with daughter Eadie (6) and Laura Warren with son Toby (8) feed the worms in their home worm farm they use to ‘‘instantly minimise waste’’.PHOTO: SIMON HENDERSON
To paraphrase Shakespeare, we fatten ourselves for worms to eat when we are dead.

However, while we are still living we can fatten worms instead — and reduce landfill waste at the same time.

That is what sustainability company Why Waste is aiming to do.

With $19,000 from the Dunedin City Council’s waste minimisation commercial grant, the company has been able to bring its worm subscription programme to the city.

For a monthly fee of about $25, individuals and businesses are able to have a serviced worm farm on site.

Founder Leo Murray said he began subscriber worm farms in Tauranga, expanded to offering them in Auckland and Wellington before bringing them to Dunedin late last year.

The business model was about scale, and so was the impact model, Mr Murray said.

"We really need to obviously capture as much waste as we can and feed it to the worms and then make soil out of it.

"The vision of course is to have a worm farm in every back yard in New Zealand."

That would not only ensure a good supply of high quality soil, it would also reduce the level of methane emissions from landfill.

The fertiliser produced can be used in gardens or can be collected by Why Waste.

Fertiliser and worm urine can be stored and used on gardens or collected by Mr Smith.

"It is fully self contained."

The worm farm was sealed so it did not smell and was could not be accessed by rodents, Mr Smith said.

"We do have a couple that are actually inside offices, so they are quite smell-proof."

They provided a one-stop for organic regeneration, he said.

Belleknowes couple Brendan and Laura Warren said they had been using the worm farm for about nine months.

Mrs Warren said having the worm farm had been "pretty easy" to manage.

The worm farm was self-contained and sat outside by the kitchen.

"We just have an old ice cream container under our sink for the scraps."

Once it was full it was a simple task to put the scraps in the worm farm.

"The kids love it, they can come and check the worms."

Doing something to "instantly minimise waste" was one of the attractions for the family, Mrs Warren said.