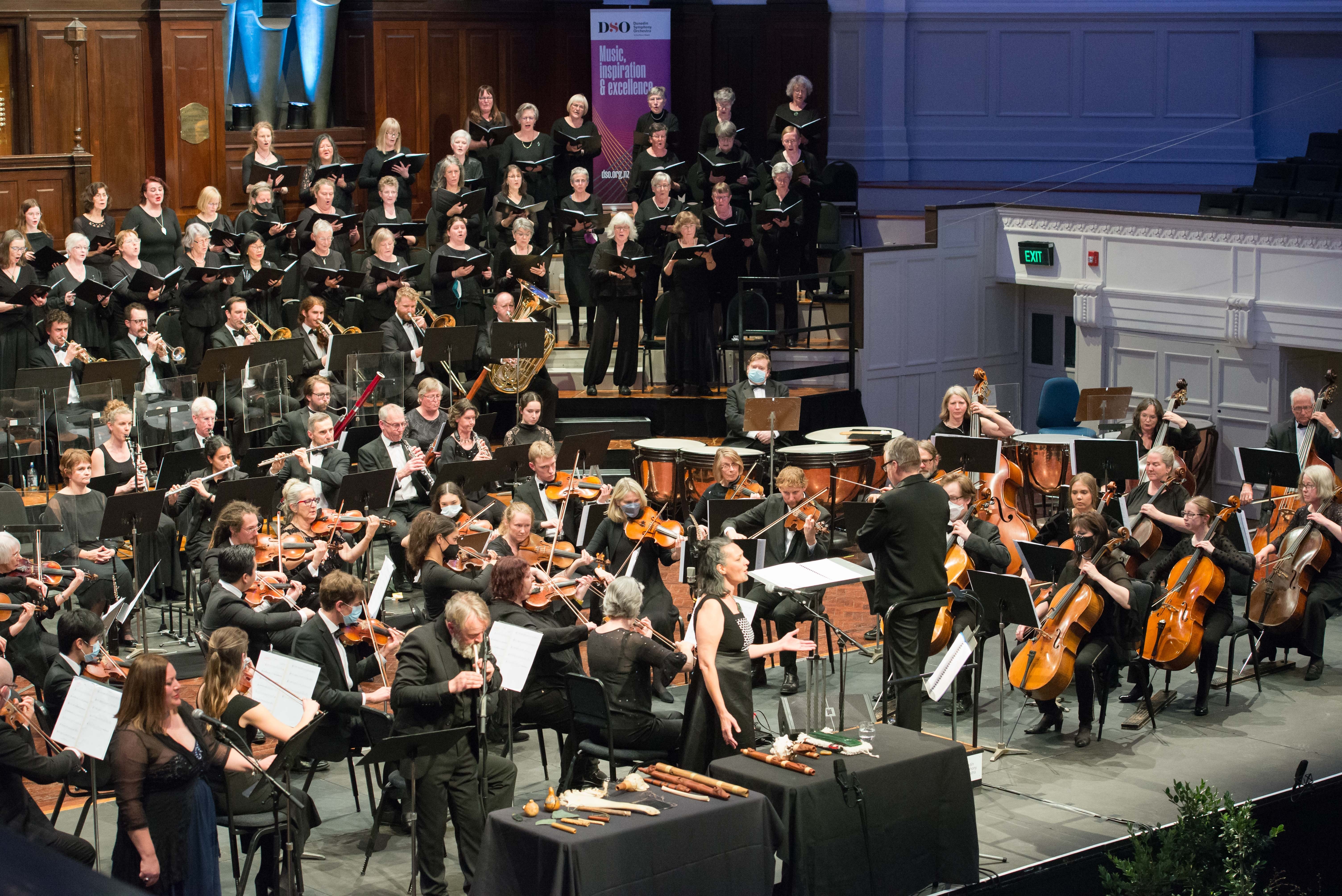 Haunting sounds . . . Soloists (from left) Rebecca Ryan, Alistair Fraser, and Ariana Tikao perform with Dunedin Symphony Orchestra during Saturday’s Celebrating Matariki concert. PHOTO: PIETER DU PLESSIS/DSO
Brenda Harwood reviews  Celebrating Matariki performed by the Dunedin Symphony Orchestra, Dunedin Town Hall, July 2.
From the first spine-tingling notes sung by soprano Rebecca Ryan, it was clear that the Dunedin Symphony Orchestra’s Celebrating Matariki concert was going to be something special.
A large audience were alternately spellbound and impressed as the orchestra and special guests, under the energetic baton of conductor Marc Taddei, gave a thrilling performance of superb Matarikithemed and epically cosmic works.
After a welcome from Mauraka Edwards, soprano Rebecca Ryan stepped forward with an a cappella performance of Gillian Whitehead’s beautiful waiata Matariki.
The contemplative mood continued with the world premier of intriguing piece New Mountain, by Dunedin composer Maddy Parkins-Craig.
Singer, composer and taonga puoro (traditional Maori instruments) player Ariana Tikao (Kai Tahu) and taonga puoro specialist Alistair Fraser then stepped up for a fascinating rendition of voice/taonga puoro concerto Ko te tatai whetu, accompanied sensitively by the orchestra.
Ryan then returned to the stage to perform the spoken words of Charles Royal’s Matariki: A Time of Renewal, with the orchestra providing a swelling, uplifting backdrop.
Bringing a fabulous first half to a close, Tikao, Ryan and the women of City Choir Dunedin joined the orchestra for a rousing performance of Philip Brownlee’s arrangement of Tikao and Leyton Glen’s waiata Matariki.
After such a varied and intriguing first half, it was an inspired decision for the Dunedin Symphony Orchestra to perform Holst’s monumental The Planets as the concert’s second half, with Norma the town hall organ played by David Burchell, and the women of City Choir Dunedin.
The seven movements of the 50-minute work, depicting the mood of the planets in turn — Mars, Venus, Mercury, Jupiter, Saturn, Uranus, and Neptune — were fantastically varied and kept the audience engaged until its ethereal conclusion with an invisible chorus of women’s voices.
Throughout the concert, whether in a leading role or in support, the DSO were in superb form, ensuring the many moods of the music were brought to the fore.
A truly wonderful concert for Matariki. Bravo!