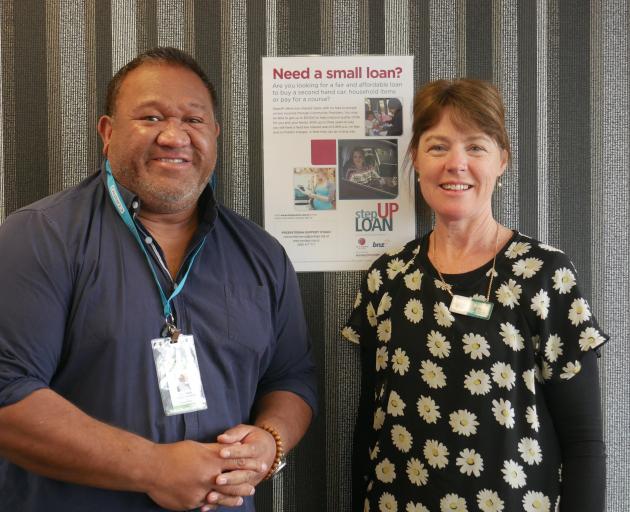 South Dunedin-based Community Finance worker Lloyd Maole and team leader Mel Aicken in their new building in Macandrew Rd. PHOTO: JESSICA WILSON
The need for a new car is the most common goal for people applying for Good Loans.

The community finance programme, a partnership between Good Shepherd NZ and the Bank of New Zealand and administered by Presbyterian Support Otago, launched one year ago.

The programme offers "Nils" no-interest and "StepUp" low-interest loans to people who might traditionally turn to predatory lenders.

In the past year, there were 184 loan applications, of which 40 were approved.

Seventy-three were declined, and others were in the review stage.

Community finance team leader Mel Aicken said applications were usually declined because the client could not afford the loan.

"The absolute key part of us doing a loan interview is ensuring the loan is going to be affordable," she said.

The client’s income was taken into considerable and payments like food, power, internet and children’s needs were prioritised.

If a client does not qualify for a loan, they can offer advice to get them into a better financial position.

That may mean tightening the budget.

Community finance worker Lloyd Maole worked with a client whose application was initially declined, but he made changes to his spending, earned extra income and got approved a year later.

"That’s been an awesome relationship and now he’s looking for a new car.

"With a little bit of guidance, it was his commitment to make those changes."

Having a goal was the most motivating factor for clients — the most common was purchasing a new car, followed by car repairs.

The loan application process was quite long and involved looking through previous bank statements, but Mr Maole said there was no judgement.

They wanted to know everything — "warts and all".

"There’s always an explanation," he said.

"Let’s just get it down and then we can work towards a solution."

Ms Aicken said, for some people, it might be the first budget they had ever had.

"And that’s exciting because a budget is always the starting point of the journey."