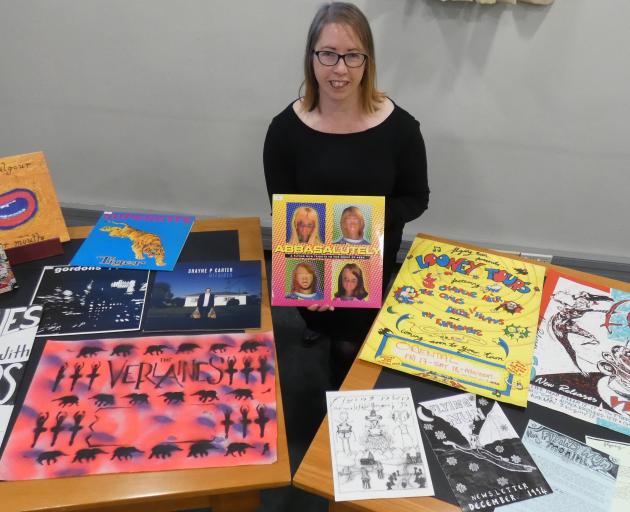 Over the past 40 years the library has amassed a wide collection of material related to legendary record label Flying Nun.

Liaison librarian and music and audiovisual curator Amanda Mills said the historical archive’s music collection began in about 1977 and now housed more than 19,000 recorded items and more than 3500 pieces of sheet music.

The library had a collection of about 500 posters advertising Flying Nun and acts synonymous with the label, including The Clean, The Chills and The Verlaines.

Many of the band members were artists as well, and they let their creativity shine on posters and record covers.

The Flying Nun label began in Christchurch in 1981 but soon developed strong links further south as the "Dunedin Sound" attracted fans across the globe.

Bands rocked venues including The Cook, the Empire Hotel and Sammy’s nightclub.

Recordings in the early years were "definitely lo-fi", on portable four-track recorders, she said.

The Clean’s Boodle Boodle Boodle EP and The Chills’ single Rolling Moon were some that were recorded on Chris Knox and Doug Hood’s four-track reel-to-reel tape recorder.

The Who Killed Col Mustard? EP by Bored Games was recorded at the former 4XO radio station.

In the late 1980s and into the 1990s some recorded at the former Fish Street Studios in Dunedin, but many of the bands recorded at The Lab Studios in Auckland.

In late 2019 the library received a collection of material from The Verlaines singer and songwriter Graeme Downes.

A "whole raft of materials" including posters, recordings, personal papers and photographs were given by the vocalist before he moved to Wellington.

The library collection showed how technology had changed over the years, the format of recordings ranging from vinyl and cassettes to compact discs.

But the Hocken was still able to provide listening options regardless of the format.

"We want people to be able to come in and listen to the material."