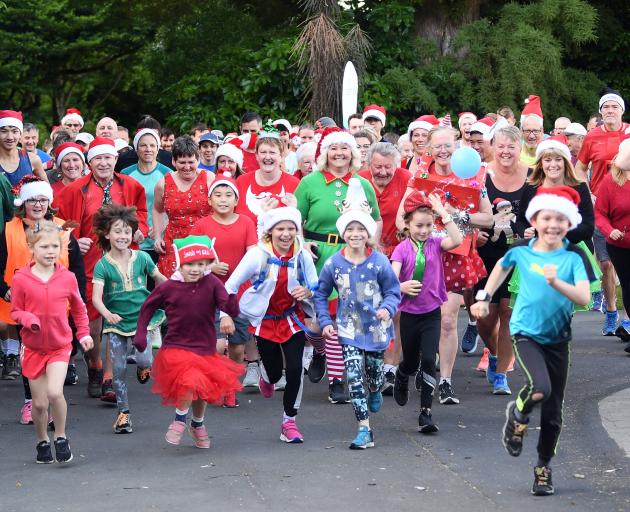 About 130 people participated in the annual Christmas Dunedin Park Run at the Botanic Garden last year. PHOTO: STEPHEN JAQUIERY
Parkrun organisers in Dunedin are waiting on word from the company’s headquarters as to when it can resume.

Parkrun events across New Zealand were paused in August when the country went in Alert Level 4 and have not been able to restart.

Parkrun’s Dunedin event director Tania Hollis said staff at headquarters in Australia were working with Sport New Zealand to get guidelines on how the event could operate under the Government’s traffic light system.

"The main sticking point at the moment is the gathering limit, if you don’t scan vaccine passes," she said.

Parkrun is a free, weekly 5km event in the Dunedin Botanic Garden which is open to anyone.

Participants could opt to register before the event and scan a barcode afterwards to be emailed their time.

Otherwise they could just turn up on the day.

"What this means under the new traffic light system is we can’t operate because we don’t have a way of ring-fencing everybody who takes part in parkrun.

"You turn up, you run, you get scanned if you have a barcode and then you just leave."

The headquarters was working out how to logistically scan vaccine passes and whether it had to be done before or after people completed the course, she said.

It would be trickier to scan vaccine passes before the event because people tended to trickle in shortly before it started.

"It will be like one minute to [the starting time] and all of a sudden there will be hundreds of people here.

Once Sport New Zealand created a framework, organisers would have to ask the Dunedin City Council if that met its requirements.

In the meantime, people were able to take part in "(not)parkrun" by running 5km at any time during the week and logging their time online.

It was a way to keep people motivated, but numbers had dwindled over time.

Hollis said she often bumped into people who asked here when it was going to restart.