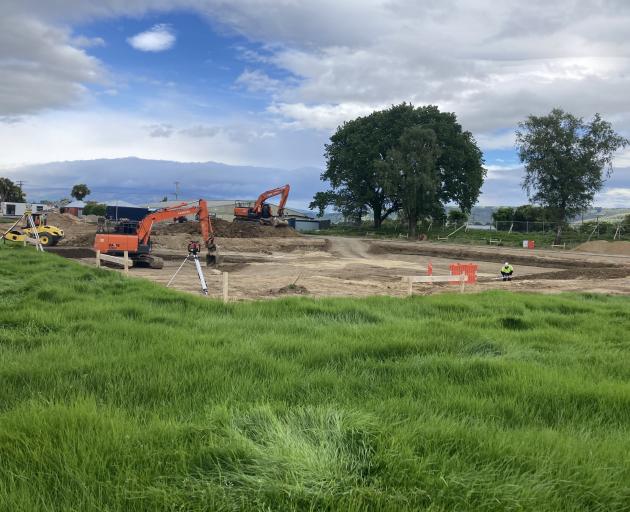 Contractors work on the new Mosgiel pool, which is being constructed on a site near the old pool. PHOTO: JESSICA WILSON
Construction of the new Mosgiel Pool is ‘‘on track’’, despite a delayed opening.

Board member Brian Miller, who is the board representative on the Mosgiel aquatic project team, thought the opening date could be in doubt as parts of the pool were still overseas.

Mr MacLean confirmed some equipment was coming from offshore, but noted the contractors, Cook Brothers Construction, had ordered parts early so they were secure.

‘‘So it’s as good as we can do, pending what’s happening around the world,’’ he said.

‘‘We’re in a pretty good space, as I understand it.

Board member Martin Dillon raised his concerns about school swimming lessons being affected for two seasons, and the costs associated with transporting Mosgiel pupils to other pools.

Taieri College’s pool was full most of the time and the pool in Argyle St was too small, Mr Dillon said.

‘‘I just want to know the cost to our community for this taking so long.’’

Mr MacLean said all swimming lessons were restricted due to Covid-19 guidelines.

The costs of transporting pupils to out-of-classroom activities fell on the schools, so he did not know how much it cost, he said.

Board member Brian Peat asked why the current pool could not have stayed open until construction on the new one started.

He saw comments online suggesting people were unhappy about the delay of the pool’s opening, and that they would be without a pool for two seasons, he said.

Mr MacLean said the council ‘‘well and truly’’ looked into keeping the current pool open but could not do so due to health and safety concerns.

‘‘There’s a lot of machinery moving back and forward and it just wasn’t a safe option.’’

He reminded the board when the new pool was completed it would be open year-round, so people could quickly make up for any lost time

The place is booming......with all the construction around Mosgiel I'm surprised they could find the labour to even start what will be another excellent aqautic emenity for the growing district.