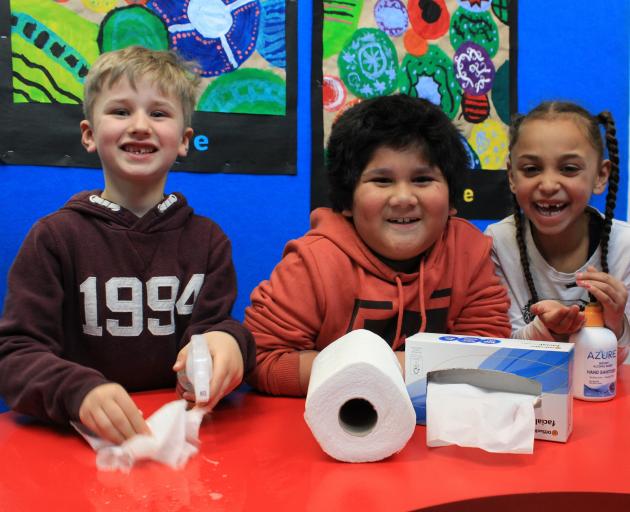 Tainui School pupils (from left) Jonas Machek (7), Harry Gill (7) and Annika Rudd (6) continue to use their Covid-19 hygiene skills to keep their school germ-free. PHOTO: JOHN LEWIS
Dunedin schools are still screaming out for relief teachers, despite a noticeable drop in sickness in classrooms.

Typically at this time of year, winter bugs run rampant around the city’s schools, leaving throngs of pupils and teaching staff absent due to illness.

"Children are continuing to experience coughs and colds, as you would expect during the winter months, although they are certainly much better at using proactive hygiene practices, such as washing their hands, sanitising when needed, and sneezing and coughing into their elbows," Mrs Wilde said.

Lessons from living through the Covid-19 lockdown had served pupils well, and it was helping to decrease the spread of all illness in schools, she said.

"There was less illness when we first came back from the Covid-19 lockdown," Mr McKinlay said.

"It was quite noticeable in Dunedin schools, I must say."

But at the end of term two, the need for relief teachers climbed to the point where the pool ran dry and some schools could not be accommodated.

The situation was not helped by term two being longer than usual, and the year-on-year decline in the number of relief teachers in the pool.

Demand had since dropped again because teachers had recently come back from school holidays and were "all revitalised", he said.

But over the next few weeks, demand was expected to spike again, as it had traditionally done.

"Usually we are crying out for relievers at the end of term two and during term three, and we really struggle to meet the demand.

Since the Covid-19 lockdown, teachers were not taking any risks when feeling unwell, and were being more careful about not spreading their illness at school, Mr McKinlay said.

"I wonder if there’s a balancing-out of each other.

"They’re not sick as much, but when they are sick, they’re more likely to stay home and not come to school sick."

The main difference between this winter and previous winters was teachers and children were staying home if they were mildly unwell, she said.

"In the past, they would tend to come to school because they didn’t feel sick enough to be away for the day."

Mr McKinlay called on anyone eligible to contact him and add their name to the relief pool.

Otherwise some classes might have to be merged with other classes for a day, which could affect pupils’ educations.