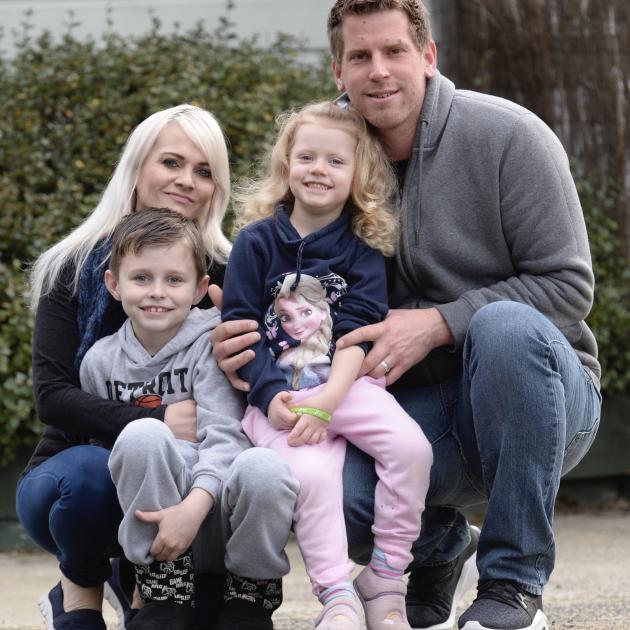 Christene and Darryn Mitchell and their children Christiaan and Abigail are enjoying being a family again after many months apart .PHOTO: GERARD O’BRIEN
Some might say out of the frying pan into the fire, but a South African couple are not worried about the Covid-19 Alert Level 4 lockdown.

After 19 months apart, Darryn and Christene Mitchell and their children, Christiaan (7) and Abigail (3), are enjoying being reunited in Dunedin.

Concerned about bringing up their two children in the problematic violence of South Africa, they decided to look for a new life in New Zealand.

“We lived in a town called Richards Bay, which is on the east coast of South Africa,” Mr Mitchell said.

“The main reason was just for safety, for ourselves and our kids.”

A particular incident reinforced the desire to emigrate.

Mrs Mitchell was in her car with her children when she realised her vehicle was being followed and she was concerned it was a hijacking attempt.

“It was kind of frightening because the kids were with me and they were still very young,” she said.

“So it was frightening to have five young guys trying to hijack you.”

In South Africa she and her husband worked for security companies.

“So we saw what was happening, and we saw firsthand with that.

“It was not a place we wanted to see our kids grow up in.”

Mr Mitchell said their house in South Africa had burglar doors, alarm systems inside and outside, and electric fencing and automatic gates.

“But being in the industry we still saw that was not necessarily enough.”

Those protections might only slow down burglars, he said.

Mr Mitchell arrived in New Zealand in January last year, securing a job as an electrician in Dunedin and finding a home for his family.

He had been planning to return to South Africa in May last year for a friend’s wedding.

“The plan was I would go back for that and then with my wife and kids we would travel back together.”

But the Covid-19 pandemic began to overtake their plans, and he was unable to return to South Africa.

The weeks stretched into months as the family had to navigate Covid lockdowns and border restrictions.

Not being able to be with their father for 19 months had been very hard on their children, Mrs Mitchell said.

Lockdowns in South Africa had been very difficult as there had been little in the way of a safety net.

“There were no proper jobs, nothing,” Mrs Mitchell said.

The alert levels went “up and down, up and down”.

“For lockdown you couldn’t really go anywhere — it was just stay at home.’’

At meal breaks children had to sit outside on a rugby field that had 2m by 2m markings, each child required to stay inside their block to maintain social distancing.

“They couldn’t play with their friends, nothing.”

The numbers who had caught Covid-19 in South Africa were quite high, she said.

“We lost a couple of family friends with Covid.”

One of her close friends said her whole family had caught Covid-19 and although they were recovering, it had taken a toll.

“They are still battling. They are better now — they don’t have it any more — but they are still tired and really battling, so it is nothing to play around with.”

After so many months Mrs Mitchell and her two children were finally able to leave South Africa in June.

They arrived in Auckland on June 26 and went into managed isolation and quarantine.

Mrs Mitchell said she was very impressed with the MIQ staff.

“They are absolutely amazing and they really look after the people, for mental health, everything — they call you a couple of times a day, for anything needed.”

On July 9 after so many months apart finally the family were reunited.

Mr Mitchell flew to Auckland to meet his family and was delighted to see them.

Hearing New Zealand was going back into Level 4 lockdown, she had joked “oh this is a breeze — we are used to lockdown,” Mrs Mitchell said.

Being in lockdown had made her son feel like he was dreaming, she said.

“I know it is hard in lockdown but I completely agree with the reasons why we are in lockdown. I’ve seen what happened in South Africa, so I am just very thankful that the Parliament and everyone involved is open-minded and they know what they are getting themselves into and that is why they are so strict.”

The family were so pleased they had decided to live in Dunedin, Mrs Mitchell said.

North East Valley Normal School had been fantastic in accepting Christiaan, and Abigail had been enjoying her time at Jonathan Rhodes Kindergarten.

“Both the schools, oh my word, they have just been so welcoming — I’ve been blown away with them,” she said.

Despite the extended time apart the family had “no regrets” about their new life in Dunedin and were very appreciative of all the city had to offer, Mr Mitchell said.

“We don’t regret making the decision at all.”

Great you are together again!!!Welcome family!!!