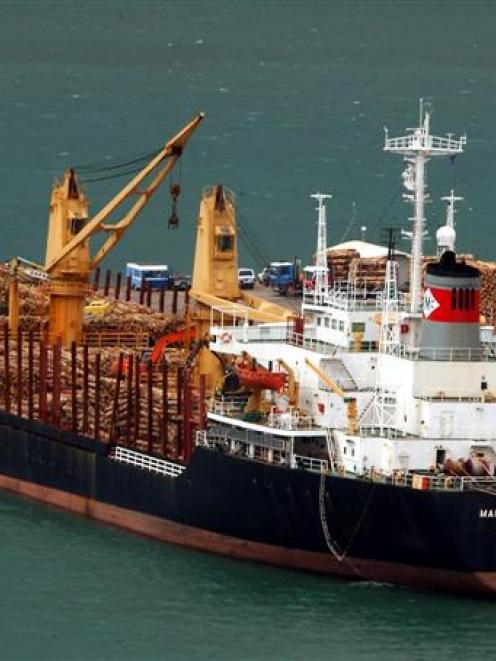 Southern forestry is down 8%, or the equivalent of one shipload. Pictured is <i>Maritime Friendship</i> at Port Chalmers. Photo by Stephen Jaquiery.
A dramatic surge in Chinese demand for New Zealand logs appears to be stalling as China has amassed vast stockpiles and prices have fallen almost 20%.

That was compounded by the strength of the New Zealand dollar, which probably undermined exporters' margins.

China's imports were driven by its strong economic growth and a reduction in availability of logs from its historical supplier, Russia.

While some New Zealand ports have been reported to have declines in log exports of more than 30% for July and August, exports from Port Otago's wharves were down only "slightly" by about 8%, or the equivalent of one shipload.

Most local foresters' volumes were down about 5% to 10%.

Southern Wood Council chairman Grant Dodson, who is also council-owned City Forests' chief executive, said the price decline from $US160 in late June appeared to have "bottomed out" at $US130 during August, and small price increases were expected during September.

He understood none of the large foresters in Otago or Southland were overly affected by the downturn, but smaller block holders could have been caught out with the decline.

"For bigger southern forest owners it's business as usual, but [the price decline] took the edge off volumes," he said.

For the year to March, the Chinese demand underpinned the sector's exports, which reached $4.4 billion for the year - up $800 million on the previous year. In total, China imported 1.7 million cu m of New Zealand logs in the quarter to March, up 44.5% on the same time a year ago.

The stellar export achievement had followed several lean years for many in the forestry sector, with several major companies around the country folding because of depressed global prices, including several sawmills and contractors around Otago.

Mr Dodson said that for the past two years Asian demand had waned in winter, while sales in spring, summer and autumn generally picked up.

City Forests had experienced a "small reduction" in volume, but Mr Dodson expected any losses would be regained later in the year and he was not downgrading the company's volume forecast for the full year.

"At some point we are going to come off a high, but we have come back only slightly," Mr Plunket said.

"We're still way above the long average, which is higher than the traditional volume," Mr Plunket said.