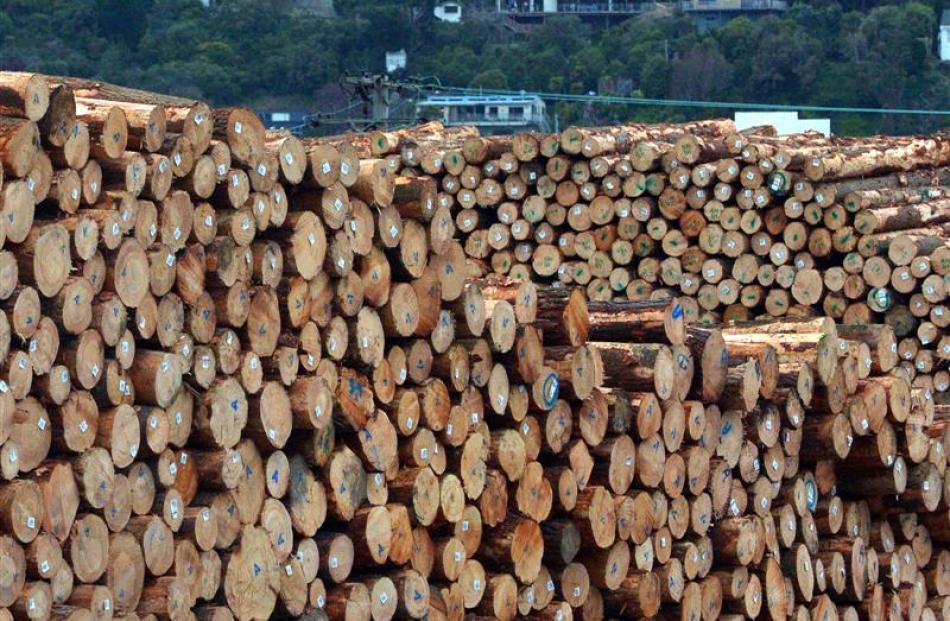 Belt tightening is ahead for the forestry sector after prices fell 25% in recent months. Photo by Gerard O'Brien.

The 25% plunge in international log prices foreshadows tough times ahead for southern forestry contract crews as smaller forestry lots are held back from sale.

The price of A-grade sawlog delivered to China has plunged about 25% recently, from about $US160 ($NZ181) to $US120 a cubic metre and no pricing improvement is expected until the end of the year or into 2015.

With China paying a premium for logs previously, profit margins for domestic sawmillers have been slashed, the worst effects to date being the closure of Southern Cross Forest Products, costing 180 southern jobs and about 70 in the North Island.

With Chinese demand waning and low prices in force, smaller ''woodlot'' forest owners across the country are cancelling harvesting plans, which is affecting logging crews not contracted to major forest owners.

Mike Hurring, of Mike Hurring Logging and Contractors, said, when contacted, times were ''getting tight'' for his six crews and he might yet have to consider half days or short weeks in the near future.

Mr Hurring's staff of more than 40 makes his company one of the largest in Otago-Southland.

''Smaller growers want to take the good with the good ... fair-weather friends when the price is there,'' he said.

He had a buffer against the worst effects of the pricing downturn, with up to 70% of work coming from large forestry owners.

Mr Hurring emphasised that forestry had to be viewed as a demand-based commodity, which was cyclical, and noted that while prices were down, there was still good demand.

''[However], many woodlot owners have now decided to close the gate, and this has reduced harvesting opportunities for logging crews not contracted to major forest owners,'' he said.

Smaller woodlot harvesting did not affect City Forests and the price correction had not prompted it to reduce staffing or its contract workforce.

The company had reduced production in general in response to its shipping schedule and poor winter weather, he said.

''The woodlot harvest in New Zealand has traditionally been log price-dependent so this is nothing new, but it makes for difficult times for those involved as they look to ride out the downturn period.

''Although prices have fallen, they have been lower in the past and [City Forest] returns are still positive.''

Mr Dodson said while the correction would be felt ''for some months'', the underlying Chinese and Asian demand for logs ''remains solid''.

Port Otago booked a 9.7% increase in logs for the year to June, up from 720,000cu m to 790,000cu m. Chief executive Geoff Plunket said that despite the price plunge, there had been no change to recent tonnage across Port Chalmers' wharves. Mr Dodson said: ''We are optimistic that prices will begin to improve again late in 2014 and into 2015. We are monitoring the situation closely.''

In Hawkes Bay, where Rayonier has 18,000ha of the 135,000ha forestry estate, its managing director Paul Nicholls said many smaller operations had already shut down.

''We haven't got a good handle of how many crews have closed around the country, though we're talking quite a few,'' he told Hawkes Bay Today.

''Our company hasn't changed. We can still sell everything we can produce and we are still making cash, though not always profit.

''We have scale on our side, so we can do that.

''But if you are a single woodlot owner, depending on your location and cost of harvesting, you may decide to close your operation if you haven't already, especially going into winter, when costs go up because of the weather,'' he said.