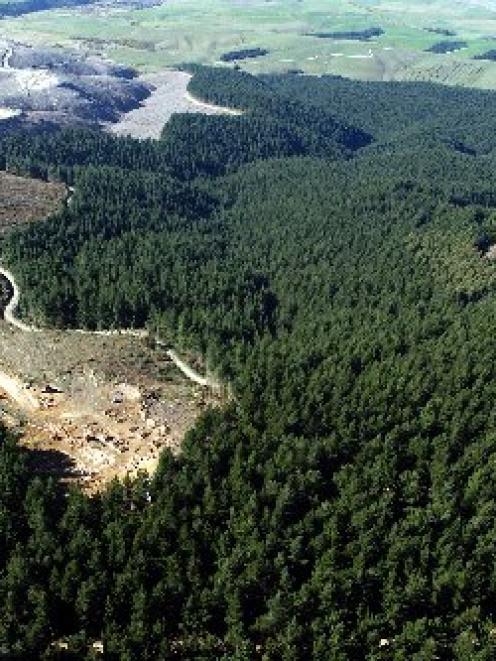 Owners of small and large forestry blocks, such as this one being felled for processing in coastal Otago, have to decide whether to consider implementing a compulsory levy in coming weeks. Photo by ODT files.
Big business forestry owners and farmers with small forestry interests are on a collision course over a proposal for an industry-wide compulsory levy order.

"It's the big boys versus the little boys," one forestry industry source said, declining to be identified.

In one corner, making the proposal, is the Forest Owners Association and its more than 119 members, mainly large forest owners covering two-thirds of the forestry estate.

However, the Forest Owners Association needs the agreement of New Zealand Farm Forestry Association's more than 2200 members, representing less than a third of the estate, to have a referendum on the levy proposal.

Forest Owners Association chief executive David Rhodes is on a nine-stop regional tour of the country to outline the referendum proposal, saying a levy would benefit the entire sector in many ways, including, research into pests, diseases, promotion of forestry domestically and internationally and would having input into government initiatives such biosecurity and carbon-related issues.

Any levy would be applied only at harvest time, and is understood to be in the range of 24c to 28c per cubic metre.

When told about criticism levelled at the Forest Owners Association by a southern representative of the Farm Forestry Association, claiming a levy was "just another tax" and making farming "unprofitable", Mr Rhodes said he was aware of their concerns.

"Yes, it is absolutely critical to get the Farm Forestry Association's [2200-plus ] members on board. They have an overwhelming volume [in votes per forestry block]," Mr Rhodes said when contacted yesterday.

However, the regional roadshow had seen a good turnout from smaller growers, including Farm Forestry Association members, who had been "positive" about the proposal, he said.

Members of the Forest Owners Association voluntarily raise $3 million to $4 million annually for research and development. Most of the small holders in the Farm Forestry Association do not contribute.

In a complicated setting, the Forest Owners Association has enough votes, based on acreage volumes held, to easily get a minimum 50% in favour of a levy. However, the vote also requires a minimum 50% by numbers of forest owners, in which case the 2200 Farm Forestry Association members hold the balance.

Mr Rhodes said the way ahead was "tricky" in finding a balance given some, by acreage, contributed 80% of funding and what could be determined as equal voting rights by the remainder.

If successful, a referendum would be held over a month until mid-March. A "yes" vote would enable a levy order application to be submitted to the minister by late March, for implementation in July.

Proposed levy
Levy would be on all harvested logs from plantation forests that were either exported in log form or processed in New Zealand, including all species and all production which leaves the forest as logs or chips, but not products such as domestic firewood, bark or Christmas trees.