Family mill does more than lumber along 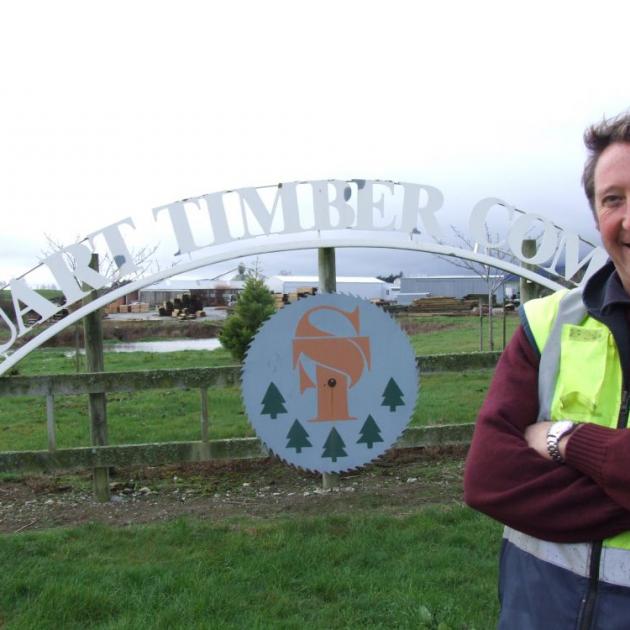 Stuart Timber manager Roger Stuart has been involved in the timber industry since leaving school. Photo by Sally Rae.
Sawmilling has always been a passion for Roger Stuart.

Unsurprisingly, it was all he wanted to do when he left school, given the family connection with the timber industry.

Stuart Timber, at Tapanui, which he now manages, was established in 1980 by the Stuart family and remains a real family business.

''Sawmilling is definitely in the veins of the Stuart crew, no doubt about that,'' he mused recently.

When they started the business, it involved his late father Campbell, three of his brothers - Stephen, Jack and Peter - and himself. They were all already involved in the industry.

Various members of the family have moved on to do other things, while Roger Stuart (50) took over management of the firm in 2001.

Roger's wife, Catherine, works on the pre-cut saw and their son Nathan (23) also works at the mill, along with three of their nephews.

A major employer in West Otago, with a staff of about 32, Stuart Timber has grown considerably since it was ''basically a little old sawmill'' surrounded by paddocks, when the previously South Otago-based family first moved to the area.

Since taking over the reins of the business, Roger Stuart has had a focus on getting ''back to the basics'' and doing them well.

Some key customers have been developed, including Placemakers and Mitre 10, while the rural market was also important.

Al;though a lot of mills probably focused on a small range of products, Stuart Timber produced a ''very wide range'', doing everything from house piles through to finished fascia boards, Mr Stuart said.

They saw themselves as ''a bit of a niche'' in the market. They could not go head-to-head with the big players so they sought to ''fill the gaps''.

Back when the company started, it was a vastly different business.

''It was real easy back then. We were just using our brawn to get on with it really.''

His dream ''from day one'' was always to have a modern sawmill, replacing the incumbent which was probably 1940s technology, and also replacing the ''grunt'' required.

Getting that mill designed and established in 2006, with a cost of about $1.5 million, was one of his highlights. The benefit was ''huge''.

The company was now virtually self-sufficient in all the processes, including a treatment plant, kilns and planers.

Two new kilns have recently been installed, at a cost of about $1 million. Kilns had been used on the site since the mid-1980s.

A steam plant has been installed, which means a different process to kiln-drying timber. A market had been identified as opening up in Christchurch for poles - both for sheds and for stabilising ground in the city, following the earthquakes.

Another planer and a post peeler were also on their way and it was now probably time to ''take our breath a wee bit'', Mr Stuart said, as ''it's been pretty full-on since about October or November last year''.

It was a complex industry to be involved in, from the trees being planted right through to the finished product, but it was also exciting.

It took him a while to figure out where the business fitted in the market. The company has at times had to lay off staff, which was ''not much fun''. A key factor to success was being flexible enough to ride the market's ups and downs.

He believed there were definitely opportunities with the Christchurch rebuild. Already, there was less timber coming into Otago-Southland from Canterbury mills. They noticed more of that at the moment than direct sales, but believed they would eventuate.

Although admitting it was difficult, Mr Stuart said he had become less hands-on in the business and allowed other staff to take more responsibility. That had made a big difference. As a result, he could step back and do more planning.

''I feel as though, now, the more I get involved with day-to-day stuff, the worse things run around here,'' he laughed.

Staff were ''awesome'', with most having been at the mill for between 12 and 20 years.

''People have often said your best assets [are] your staff. That's absolutely the case here.''

He enjoyed the variety of his work and the challenges. One day he could be talking to a key supplier in Auckland, the next he could be working behind the planer doing physical work. He was ''always there to step in and fill in'' if there were gaps.

Log supply posed a few challenges, although they had never run out. In the current export market, trees were being cut down a lot younger, whereas they needed them a bit older.

Logs were sourced within about a 100km radius of the mill.

The company had always done a small amount of exporting, cutting its teeth on the Australian market until it found those exports were cutting across their domestic range ''a bit too much''. Exporting to Asia fitted in a little better with the company's current domestic grades.

Mr Stuart expected they would ''always do a little bit'' of exporting, but they did not chase it that hard. There were plenty of inquiries and they could do more, as demand was high.

He did not really want to see the business get bigger, saying the time of the early 1990s, when they employed about 50 staff, had been a learning experience. Management of growth back then overwhelmed them and they did not grow into it quietly.

Asked what it was like to be involved in a family business, a broad smile broke across Mr Stuart's face: ''Oh mate, it's awesome.''

Two of his brothers retain an involvement with the timber industry - Jack Stuart works at Placemakers in Cromwell, while Peter Stuart has a timber yard in Christchurch.

There were no regrets about shifting to West Otago, which was a ''great community'', or the move to establishing Stuart Timber.