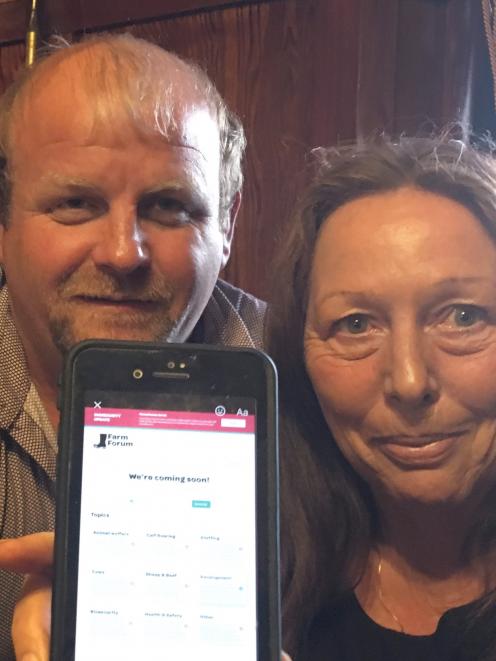 Shaun Dettling and Pam Thompson, who managed two dairy farms in Australia with the bacterial cattle disease, are happy to discuss their experiences with New Zealand farmers.

The disease was first detected in New Zealand on a Van Leeuwen Dairy Group property in the Waimate district in July last year. The number of properties confirmed to have the disease is now 21.

Mr Dettling and Ms Thompson have set up a Facebook page as a place  to discuss some practical steps  for dealing with the disease and what had worked for them.

Mycoplasma bovis was recognised as a significant problem in Australia in 2006. It was found in all dairy regions and in many large herds, the couple said.

When they arrived in Australia, they were told "you’ll be right" when it came to dealing with the disease.

"They are so used to it," Ms Thompson said.

It was shortly after their return to New Zealand that the outbreak was announced, along with subsequent concerns about its effects and whether it could be contained and eradicated.

Ms Thompson had "utter respect" for the way the Ministry for Primary Industries had been dealing with the outbreak, saying what it was doing now was "totally correct".

"MPI hit the ground running and they are still running," she said.

Eradication is still the focus for MPI, which has extended testing for Mycoplasma bovis nationwide and dairy companies are working with MPI to support sample collection from dairy farms.

The programme involves testing three milk samples from every dairy farm. One sample is taken by the dairy processing company from the bulk milk provided for collection.In addition, farmers are asked to provide two samples from their sick cow mob. The disease is more easily identified in milk taken from sick animals.

More than 50 information meetings for farmers are being held across the country over the next four weeks with presentations by dairy companies, MPI and DairyNZ.

If it could not be eradicated and farmers had to live with it, then it was very easy to manage. There were several simple rules — clean and tidy operations and low stress, they said.

There was a huge emphasis on looking after stock and time management was needed with that to ensure that stock were fed consistently.

"If you put somebody in charge of managing a huge herd of cows and they don’t have the experience ... then they are going to stress, especially if they’re handling staff, and that comes out in the cows," Ms Thompson said.

Cows could carry Mycoplasma without showing any signs of infection. It could spread during milking from one quarter to another in the same cow or other cows, via milkers’ hands and milk liners. Cows could be infected through contact with contaminated nasal or uterine fluid, they said.

They found mastitis was often in multiple quarters and did not respond to treatment. Both farms they were on had high cull rates in the past, with the reason given as untreatable mastitis.

But there was no improvement in the bulk cell count. Looking further back in the records, mastitis cows had been retained to feed calves and calves could be infected by consuming milk from infected cows, they said.

Another symptom they found was lameness and swollen joints and, in all the cases they saw, that was the front legs — sometimes one, sometimes both. There was no broken skin but they were swollen around the knees. Not all cows developed pneumonia and they found that more in calves.

Once  the disease was diagnosed,  planning could be done. On one of the farms in Australia, the relief among the staff was evident when the couple told them what the plan was — because they finally had a plan. They had two years of negative milk sample tests in Australia.

Cows were loners and did not like to touch each other and Mr Dettling believed some properties in New Zealand were getting a little bit over-stocked. He would not be surprised if  more properties were detected with the disease, given it had been so dry and lots of cows were being stressed.

MPI has acknowledged the National Animal Identification and Tracing Scheme (Nait), which traces the movements of cattle and deer throughout the country, had fallen short of expectations.

But it was the first test for the system and while MPI was being blamed, it came back to farmers not doing their job properly, Ms Thompson believed.

The system was not perfect but it had been put to the test and, after a review, some things were going to be fixed. Accurate record-keeping was part of farming, she said.

The couple urged farmers to run their  operations like the often multimillion-dollar businesses  they were, taking pride in what they were doing and implementing ‘best practice’.

Going to town in a dirty ute was "no longer a badge of honour", nor was wearing dirty clothes. Changing clothes was a five-minute job, she said.

Staff needed to be looked after to ensure that they were not stressed and time management was the biggest issue.

The couple were now setting up an online farmers forum, which would also bring in sheep and beef farmers. It was still in the development stage but they wanted something for farmers that was simple. Topics would cover the likes of animal welfare, health and safety, biosecurity, staff and calf rearing.