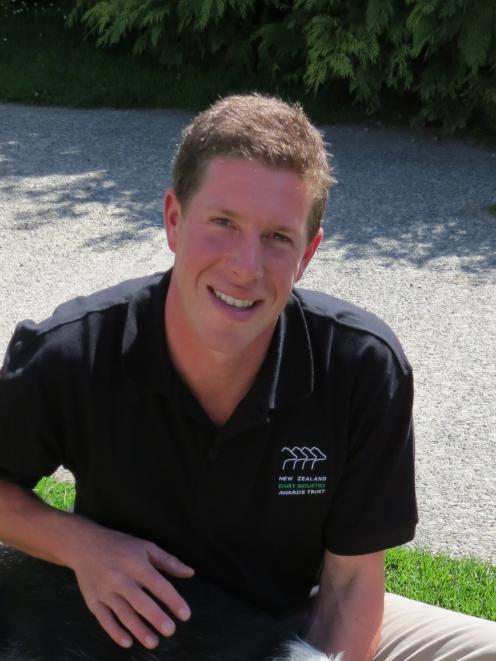 Southland Otago Dairy Trainee of the Year John Lavender, of Lochiel, is looking forward to the national New Zealand Dairy Industry Awards next month. Photo by Yvonne O'Hara
It is only a little more than four weeks to go before Josh Lavender, of Lochiel, is up against the nations' other ''best of the best'' dairy trainees, so he is spending as much time as he can preparing.

Mr Lavender (26) won the New Zealand Dairy Industry Awards' Southland Otago Dairy Trainee of the Year a month ago and since then has combined work as 2IC on a 752-cow property near Lochiel with catching up with study for his Production Management Level 5 through Primary ITO, preparing a DVD and speech for the nationals, and learning as much as he can about the industry.

He works for Martin and Kim Axten, near Lochiel, who were second place-getters in the 2011 Southland Sharemilker of the Year competition and who also employed the 2012 Southland Dairy Trainee of the Year, Robert Ankerson.

He said the Axtens had been supportive and encouraged their staff to study through Primary ITO and enter the awards.

''They are really good guys to work for and look after their staff,'' Mr Lavender said.

He will be their farm manager next season.

He comes from a dairying background and prior to moving to Southland to be with his partner Chantelle Ross, he attended Lincoln University and then worked for a transport company.

''We were making the most of the $39 flights between Queenstown and Christchurch for a time,'' he said.

After moving to Southland he worked for a contractor in Otautau.`It has been a great move coming south,'' he said.

''I saw the strength of the industry and that confirmed that was where I wanted to be.''

He saw an article about the Axtens in Southern Rural Life and approached them for a job about two years ago.

Mr Lavender is looking forward to working as farm manager next year and sees it as a step towards his goals of building stock numbers for 50/50 sharemilking and eventual farm ownership or equity partnership.

He enjoys working with cows and being outside, as well as the variety of jobs that entails.

''It is a fantastic lifestyle.

''I am a morning person and will rather see the sun come up than see it go down.

''For me there's opportunities for growth within Martin and Kim's business and this is where I see myself for the next couple of years.''

When not working, he enjoys playing squash and taking DairyNZ courses to further his career.

- Milking will be increased to 780 to 800 cows next season - an additional 95ha was converted last season.

- The target is 350kgMS, which will probably be exceeded.

- Last year, 1500kgMS/ha or 447kgMS/cow was achieved and this year is estimated to be 1430kgMS/ha or 460kgMS/cow. The stocking rate was higher at the start of last season and they have the additional 95ha.