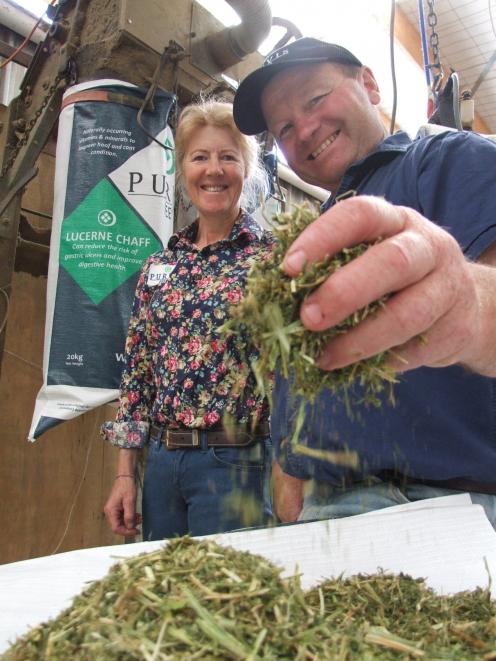 The couple, who are well known on the rodeo circuit, recently added a New Zealand-first product to their business — chopped lucerne infused with cold-pressed rapeseed oil.

Now, whether it was a winning race-horse fuelled by their lucerne or a pet lamb being reared on it, they were equally delighted to hear success stories.The story began about 20 years ago when Mr Purvis had a sick horse and could only find poor quality chaff to feed it.

"I thought, I could do better than that", he recalled.

Coincidentally, he was working for a farmer in Central Otago at the same time who had a chaff-cutter sitting unused in his yard.

So he bought it and began initially making chaff for himself. But then word spread and other people wanted it, including prominent local harness racing trainer Phil Williamson, who remains a client.

From there, PGG Wrightson in Oamaru started stocking it and then other stores came along. It could now be purchased at all Farmlands stores in the South Island.

Following a recent sales trip to the North Island, Mr and Mrs Purvis were now selling to Farmlands in Cambridge — the heart of the horse racing industry — and  direct to some trainers in the North Island.

The couple grew some lucerne on their property while the rest was sourced from Central Otago. They had several contract growers who realised the benefit of making good hay. Their hay needed to be stone-free, weed-free, fit  and ideally of good colour.

The couple have travelled widely, including to Italy, Canada, the United States, the United Kingdom and Australia, looking at various ways of drying hay, chopping chaff, marketing, different types of chaff, and how other countries used and fed it.

In 2014, they imported innovative hay-drying technology from Italy. The dryer holds 24 round bales, drying them evenly to a desired moisture content.

They got the idea of infusing chaff with oil from the UK and after extensive research and trials, launched the product.

The oilseed rape oil, which was GM-free, was sourced from Canterbury-based Pure Oil NZ which sold it to large food manufacturers through to individual consumers.

As well as making it dust-free, it also softened the lucerne and provided health benefits. It added Omega 3, 6 and 9 and the fat content was similar to many cereal feeds and concentrates.

But the same buzz also came from hearing from those successfully rearing lambs, calves and goat kids.

"You get the same buzz whether it’s a winning racehorse or a lamb being reared on it," she said.

It was more than work — it was also their passion — and Mrs Purvis, who loved learning, had learned a lot about everything from nutrition to marketing and accounting.

She did the Agri-Women’s Development Trust’s Understanding Your Farming Business course, while they also had a business mentor, which had been a worthwhile move.

The couple, who processed about 20 unit-loads a year, aimed to go full-time.