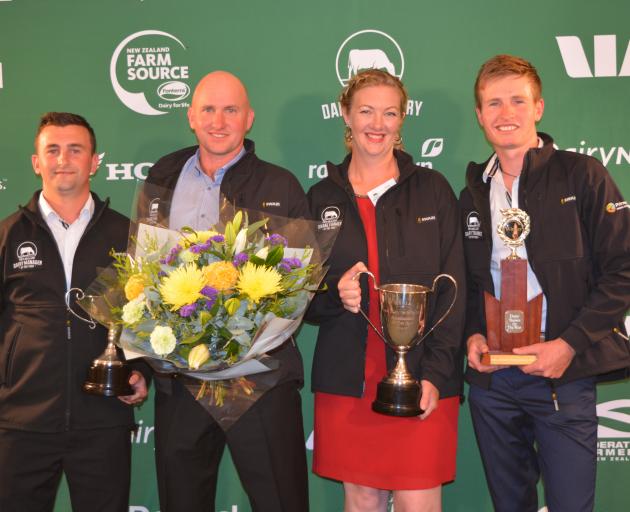 The winners in the West Coast-Top of the South New Zealand Dairy Industry Awards are (from left) Dairy Manager of the Year Jack Raharuhi, Share Farmers of the Year Jon and Vicki Nicholls, and Dairy Trainee of the Year Clay Paton. Photo supplied.
A young man who went into dairy farming after ''falling in with the wrong crowd'' at school is earning accolades.

Jack Raharuhi (24) has been named the West Coast-Top of the South Dairy Manager of the Year.

He was presented with $4680 in prizes at the recent New Zealand Dairy Industry Awards regional awards dinner in Shantytown.

Mr Raharuhi, who manages a 482ha Landcorp property in Westport with 1150 cows, began milking through a Gateway programme at Buller High School nine years ago.

''Dad pulled me out of school and into full-time employment as a farm assistant for Landcorp. I've been with them ever since.''

He has worked his way up the industry, now overseeing a second-in-charge programme that involves training and mentoring others in the Landcorp cluster.

Mr Raharuhi has also continued his own studies, completing various Primary ITO courses and working towards a Diploma in Agriculture.

He is passionate about health and safety on the farm, having lost a close friend in a quad bike accident.

''I believe that the business I work for has a very high health and safety culture, which sits with my values.''

His goals include becoming an operations manager across several farms, together running 5000 to 10,000 cows, and further personnel roles.

''I would like to start a training facility to attract people to the dairy industry and help mentor those already involved, through study and practical support.''

He said he had gained huge benefits and met some really good people through entering the dairy awards.

Murchison couple Jon and Vicki Nicholls are the West Coast-Top of the South Share Farmers of the Year, in their third tilt at the title.

They are 50% sharemilkers on a 185ha Greenmile Ltd farm with 470 cows and see their low production costs and high stock sales as the main strength of their business, keeping expenses down and income up.

Mr and Mrs Nicholls won $6430 in prizes. They said they entered the competition to meet others in the industry and analyse their own operation.

Their goal is to buy their own land in the future.

Carl Wilmshurst and Anna Boulton, of Kowhitirangi, were second, and Craig and Jackie Brake, of Ahaura, were third.

The West Coast-Top of the South Dairy Trainee of the Year is Clay Paton (23), who is second-in-charge on a 450-cow, 163ha Wakefield farm.

He entered the awards to help open up future career opportunities and received $6285 in prizes.

''I hoped to learn something about myself and find areas I can improve in, as well as benchmark myself against other employees at a similar level,'' he said.

Mr Paton has been in the dairy industry for three seasons, after starting landscape architecture studies at Lincoln University.

He would like to progress to contract or lower-order sharemilking within two years while continuing to grow equity, then achieve farm ownership or a large-scale sharemilking position by the age of 30.

The three section winners go on to the national finals at Auckland's Sky City Convention Centre on May 6.