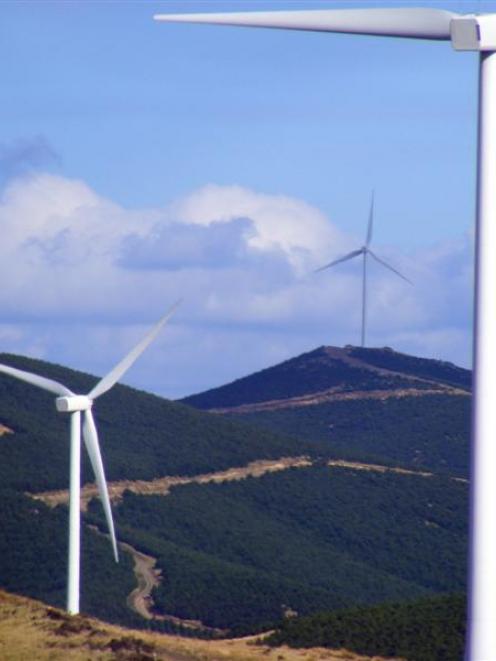 Meridian Energy's White Hill wind farm near Mossburn in northern Southland, one of seven such farms it operates, or is building. Photo by Simon Hartley.
Five separate and independent reports have now been lodged with the New Zealand stock exchange about Meridian Energy's partial share float.

With a cap of $1.60 per share having just been set for Meridian Energy's initial public offering, the Government has ensured there is no lack of public information in the form of the commissioned reports, unlike the Mighty River Power float and its lack of publicly available analysis, which attracted criticism.

The offer closes on Friday and the listing is scheduled for October 29.

The commissioned reports of Woodward Partners, Edison and TDB Partners were released earlier in the month, followed last week by Morningstar and First NZ Capital's reports.

None is hugely critical, but the complexity of the electricity sector, and what investors must wade through and weigh up before making a final choice, is revealed in the respective brokerages' research.

The main points include the future impact of Southland's Tiwai Point aluminium smelter, southern hydro-generation and the Labour-Greens proposal to reform the electricity market.

The latter potential Labour-Greens reform is rated as an unlikely outcome from the election, but generally it is considered the highest-risk component of the analysis, described by the five brokerages as ''the major risk element'', the ''biggest risk'', a ''huge impact'', ''fairly extreme''and a ''key issue''.

The investors' $1.60 for Meridian shares would be paid in two instalments over 18 months, and they would receive any dividends in full during that period, offering an attractive yield.

The latest reports from Morningstar and First NZ Capital both predict strong cash flows for Meridian, with Morningstar saying it expected the strong free cash flow to be generated from a ''dramatic decline in capital expenditure.

''This ... will prompt the board to lift the dividend payout from 80% to 100% of free cash flow. Consequently, we project dividends to increase by 11% per annum on average during the next five years.''

Morningstar has largely set aside the polarising issues of the future of Rio Tinto-owned Tiwai Point aluminium smelter, where the Government recently came up with $30 million for Rio when negotiating a new supply contract.

Morningstar said the deal gave Meridian, and the electricity sector in general, more certainty and allowed companies time to adjust to changing circumstances.

''Principally, New Zealand Aluminium Smelters [NZAS, Rio Tinto's operating subsidiary] receives a discounted price from July 1, 2013, which we believe is in the order of 15% if it consumes the requisite amount of electricity''.

Given Meridian's large exposure to Tiwai, selling 40% of its power to the smelter, its existence to Meridian was ''critically important'', but Morningstar said it had not factored the Tiwai closure into its forecasts. Morningstar noted the electricity price discount still applied after January 2017, if NZAS reduced consumption, meaning Meridian could sell the surplus on the higher-priced spot market.

''We believe regulation would most likely reduce returns for all power companies and possibly reduce Meridian's operating income by $170 million.''

First NZ Capital had factored discounts into its valuations for a Tiwai closure and Labour-Greens reforms, but noted their ''low likelihood of occurring''.

However, should the Opposition reforms go ahead, Meridian was expected to ''take the brunt'' of the regulatory change, with its discounted cash flow (DCF) valuation declining by 69c per share, while the DCF for Tiwai's closure was just 2c.

''This [2c per share decline] concurs with the management statements that the new contract was signed at a price where Meridian is economically indifferent to [Tiwai] shutdown,'' First NZ Capital said.

Edison said the ''very attractive'' intervening dividend yield, between an investor's first and last payment, of 13.4% was a major draw, while Meridian's dividend policy would see about 140% of net earnings paid to shareholders.

The low debt levels, strong cash flows and ''sharply lower'' capital expenditure, from the second half of next year, left plenty of medium-term scope for the return of further capital to shareholders, Edison said.

Meridian was more susceptible to droughts than other producers, and dry years could reduce cash flows, earnings and dividends, Woodward Partners said.

TDB Partners said much of Meridian's pricing volatility stemmed from its high reliance on hydro power.

As with Contact Energy, TrustPower and Mighty River Power, it would be a mistake to regard those companies and Meridian as utilities with stable earnings.

''These companies, and Meridian in particular, face and must manage a high degree of uncertainty about water inflows, other fuel prices, the regulatory regime and competitors' behaviour,'' TDB Partners said.

In some respects, First NZ Capital may have best summed up Meridian's future, in lay terms, in its opening disclosure:

''Reliance on hydro generation and its influence on electricity prices can result in significant earnings volatility from year to year''.

Last week's decision by Mighty River Power to launch an up-to $50 million buy-back of its underperforming shares is designed to boost its share price - a credible tool but which was criticised as a cynical move to sweeten Meridian's attractiveness.

The issue raises questions over where investor appetite really lies for these large, and for many unpopular, partial floats.

It appears that, given the level of scrutiny ascribed within the five reports to the potential for political interference, and wider generation issues, investors must put some hard questions to their stockbrokers.

• Meridian has 272,000 customers. Rio Tinto, Tiwai's majority owner, gets an estimated 15% discount on electricity, according to broker Morningstar.