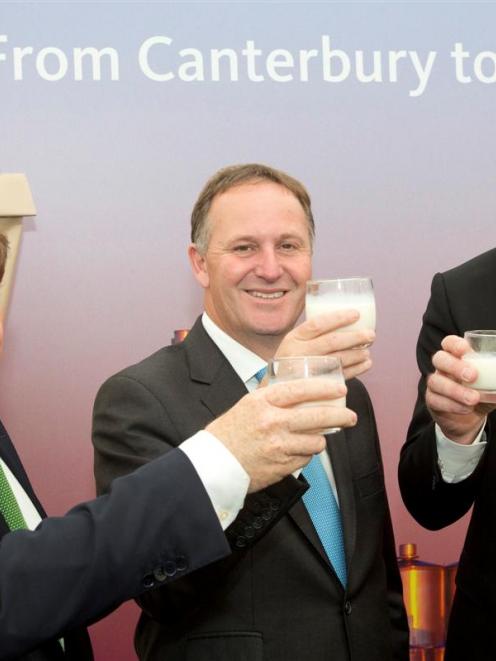 About 30% of the available units traded yesterday with interest regathering strength after the Australian market opened. Brokers said the trading exceeded all expectations.

A special ceremony was held in Canterbury to mark both the official launch of Trading Among Farmers (TAF) and to open the co-operative's new $200 million milk powder plant at Darfield.

Both those milestones symbolised the strong future for the dairy co-operative, chairman-elect John Wilson said.

While Fonterra was a global company, its roots had "always been firmly planted in rural New Zealand" which was why the events were combined at Darfield, Mr Wilson said.

TAF provided Fonterra with a stable capital base and created the conditions of confidence for it to invest in the most productive areas to add value, grow its brands beyond existing positions and compete strongly in the most rapidly growing dairy markets in the world - Southeast Asia, the Middle East and China.

"Today for the first time in Fonterra's history, farmer shareholders are able to buy and sell shares among themselves on the Fonterra Shareholders' Market," he said.

"At the same time, members of the public can now gain exposure to a New Zealand success story and the world's largest dairy processor by buying units in the Fonterra Shareholders' Fund."

A cow bell, crafted especially for the occasion, was used by Southland farmer and Shareholders' Council councillor Philip van der Bijl to ring in the launch of TAF at midday.

Debate previously raged over the controversial scheme, particularly over future farmer control and ownership of Fonterra, before the co-operative gaining a mandate in June to proceed.

A final vote of 66.45% in favour of implementing the scheme meant two out of every three votes supported the move in a record voter turnout.

Fonterra's chief executive Theo Spierings paid tribute to the hard work of more than 1500 people who had built a "world-class" dairy processing site from paddock to powder in just 18 months. Since August, when the first bags of whole milk powder rolled off the production line at the plant, more than 30,000 metric tonnes of product has been produced, destined for customers in China, Southeast Asia and the Middle East.

About 2.4 million litres of milk were processed in a single day.

Work was now well advanced on building a second drier at the site, which would be ready to process milk in August next year, tripling the site's capacity.