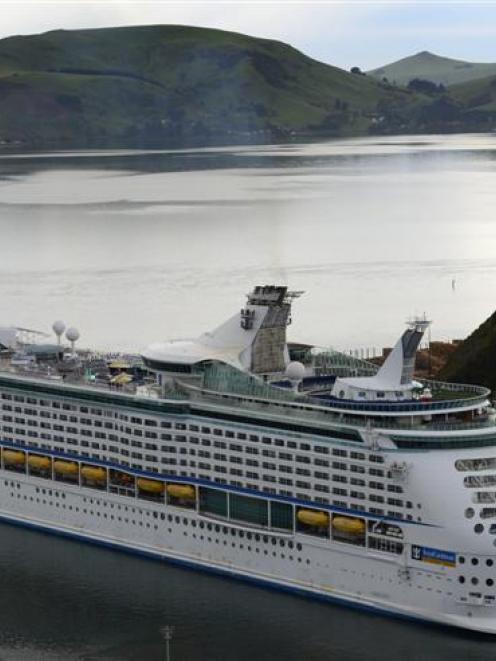 Together, these vessels combined to give an interesting total of 1,592,852gt, certainly a port gross tonnage record for this time of the year.

Of this total, the seven cruise ships, including our largest visitor, the 137,276gt Voyager of the Seas, accounted for 602,8938gt.

This month, and hopefully with no cancellations due to weather-related conditions, here or elsewhere, 15 cruise-ship visits are scheduled for Port Chalmers.

They will account for 1,422,619gt of shipping handled there for the last month of the year.

Voyager of the Seas is down for three calls, and newcomer Celebrity Solstice, scheduled for two visits, will become our second-largest visitor at 121,878gt. Also returning is the former record-holder, the 115,875gt Diamond Princess.

It will be interesting to see what the final gross tonnage figure for all vessels handled at Port Chalmers this month will be.

And records could be made early next year when along with the usual traders, cruise-ship visits peak with 19 calls in January and 17 in February.

This week the port will host visits from three ships, new to our export log trade.

STX Harmony is due at Beach St today, and Glorious Starlight will arrive on Wednesday to load at Dunedin, before moving down to Port Chalmers. After this vessel departs, Tenna Bulker is scheduled to berth at Port Chalmers.

Tenna Bulker has been here once before, at Ravensbourne, in November last year. This time it is coming direct, in ballast, from a port not usually connected with local shipping, Batangas in the Philippines.

The 16,960-gt Singapore-registered vessel, operated by Denmark's Lauritzen Bulkers, has been in service since January 2005. It is another of the popular design built by the Imabari Shipbuilding group at their Imabari yard.

Glorious Starlight is a slightly larger 17,019gt newer version of this same basic design. Launched this year on February 6, it entered service on March 28, under the flag of Panama for Kashima Naviera S.A., of Tokyo.

It was built by the groups I-S Shipyard Company, formed in 2008 when the Hashihama and Nishi shipyards merged.

STX Harmony is also coming direct, in ballast, from another port not connected to shipping here, Taichan, a small Chinese port on the coast of Jiangsu province.

This 20,867gt vessel is another product of the Taizhou Maple Leaf yard at Linhai. Like STX Gloris, which loaded logs at Dunedin and Port Chalmers in October, it is one of eight vessels ordered from these builders for STX Pan Ocean, of Seoul.

Another vessel calling for the first time this week, and representing Denmark's Norden group, is the tanker Nord Independence. Owned by a company called Sun Friend S.A, the tanker is operated under the flag of Panama by the Norient Propduct Pool S.A.

An overseas report received a week ago shows the number of inactive container ships has reached 308 vessel comprising 546,780TEU. That number looks set to increase in the weeks ahead as carriers adjust to meet lower demand on many trade lanes.

Largest is the 11,400TEU CMA CGM Libra, which has been stood down from the French Lines FAL service following the introduction of the new 16,020TEU CMA CGM Marco Polo.