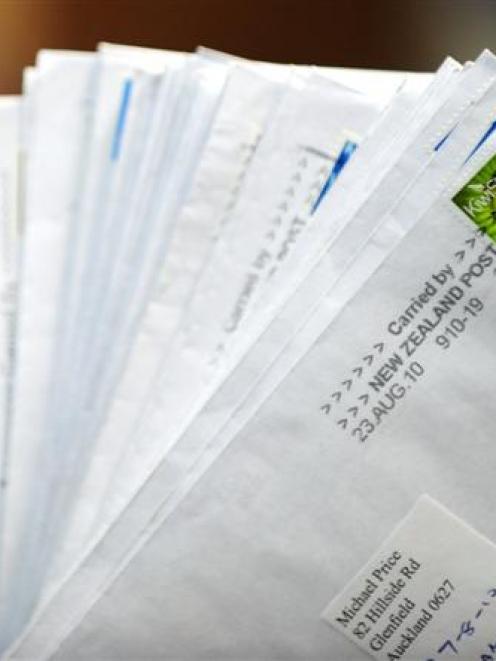 New Zealand Post is still struggling with falling mail volumes. Photo by Craig Baxter.
An after-tax profit of close to $100 million by Kiwibank helped New Zealand Post lift what would otherwise have been an ordinary profit for the year ended June.

NZ Post reported an operating profit of $65.3 million for the period, down 24% on the $85.8 million reported in the previous corresponding period (pcp).

However, after gains on sales were taken into account for both periods, the profit before tax was lifted to $122.2 million this year compared with $190 million in the pcp.

This year, the company paid only $1.25 million in tax, a 1% payment on its before-tax profit, compared with a 19% tax payment last year.

The reported after-tax profit for the period was $121 million, compared with $170 million in the pcp.

The group will pay an unchanged $5 million dividend to the Government.

NZ Post group chief executive Brian Roche said the operating performance was driven by a solid financial result from the Kiwibank businesses and growth in the courier segments of the group.

The postal segment continued to face an accelerating decline in mail volumes, further highlighting the need for fundamental changes in how services were delivered.

The group earlier announced the Dunedin mail centre, in Strathallan St, would close with the possible loss of 73 jobs. Service centres in Wanaka and Queenstown would also be affected.

Mr Roche said the result partly reflected the first year of the return to full ownership of Express Couriers, which operates the CourierPost and Pace services.

''Express Couriers' result in a highly competitive market was encouraging. There is significant growth potential in our express delivery business for parcels and time-sensitive documents.''

Kiwibank achieved an increase in market share in a relatively static credit environment, he said.

Bad debt expense was improved by the release of several large specific provisions after successful resolution of those debts.

''Our financial services portfolio continues to be a key growth driver for the group. That growth and Reserve Bank regulatory requirements create the demand for more capital.''

Kiwibank's own earnings, planned market issuances and support from the group would meet those demands in the short-to-medium term.

Discussions around the long-term capital support for the bank were ongoing, Mr Roche said.

Postal business revenue fell $30 million, the fall in postal volumes accelerating from 6.7% to 7.5%.

There were 63 fewer items in the postal network than in the previous period.

Tight cost management enabled the letters business to ''essentially break even'' at an operating level. However, consistent with global trends, the rapid decline in the use of letters as a means of communication was placing increasing pressure on the service, he said.

While there continued to be opportunities for the group's mail and communications business, fundamental change was required in the network to adjust to changing customer preferences and access those opportunities.

Reconfiguring the mail processing network and exploring digital solutions were only part of the solution.

There remained a pressing need for greater flexibility in the deed of understanding in respect to delivery and the retail store network, Mr Roche said.