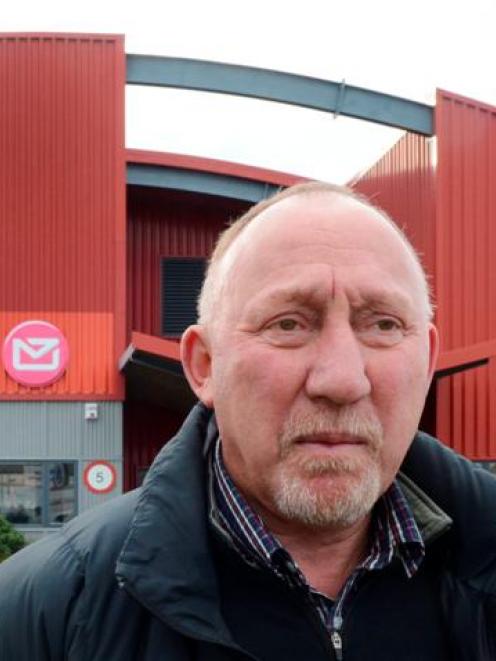 Engineering, Printing and Manufacturing Union organiser Mike Kirwood in front of the Dunedin mail centre which will close as part of a major New Zealand Post restructuring. Photo by Gerard O'Brien.
Workers at the Dunedin mail centre are devastated their jobs will go in a major restructure of New Zealand Post, union representative Mike Kirwood says.

And Otago Chamber of Commerce chief executive John Christie is ''incensed'' at New Zealand Post's decision, saying the Government made a mistake in not considering Dunedin for expansion rather than Christchurch.

About 73 Dunedin-based workers face a bleak future after yesterday's announcement the Strathallan St mail centre will close next year. In satellite areas such as Oamaru, Invercargill, Gore, Queenstown-Wanaka and northern centres, another 133 jobs will go.

Most Dunedin workers are considered unlikely to seek work in an expanded Christchurch mail centre.

NZ Post told its workers about the job losses on Tuesday night and yesterday morning, Mr Kirwood, an organiser with the Engineering, Printing and Manufacturing Union, said.

''It was a rumour that jobs would go but it was still a shock for the people to hear the news from their supervisor.''

Mr Kirwood estimated 5% of the 500 workers being made redundant nationally would be prepared to seek work in either Christchurch, Manawatu or Auckland. Along with Dunedin, the Wellington and Hamilton mail centres will close.

There will also be redundancies in areas such as Queenstown and Wanaka, with those ''satellite jobs'' set to go as soon as August.

''Our members said there was no point going to Christchurch, buying a new house, and watching mail volumes continuing to drop,'' Mr Kirwood said.

''These people are losing their jobs. There are no job opportunities and the Government, in our view, is not creating any employment. Where do they go?''More job losses were possible in the future, he said.

The Dunedin mail centre had just completed a round of redundancies, with five people volunteering to go.

''Given what they have just gone through, this doesn't help morale down there. It is stressful for people not knowing if they have a job.''

The union would provide support for people as the news sank in, Mr Kirwood said. Having dealt with redundancies from the former Fisher and Paykel Appliances plant, near Mosgiel, the union was aware of the stress people would face during the next 12 months as the date of their redundancy was announced.

The company had offered enhanced redundancy, but only for people who had worked there more than 15 years, Mr Kirwood said.

Mr Christie said Dunedin jobs were being lost to the benefit of Christchurch, a city already struggling to find workers and provide worker accommodation and premises for businesses.

''There is no question mail volumes are dropping, but I am asking 'why not Dunedin?' Dunedin would have made a good case to increase jobs here rather than make people redundant,'' Mr Christie said.

Christchurch had become a high-cost centre in which to do business and there was no argument that, on economic grounds, an expansion in Dunedin would have helped NZ Post lower its costs, Mr Christie said.

''There will be a significant economic impact on the city, particularly if the people can't find work at a local level. I hope those affected can transfer their skills into the community but it will take time. The job market is difficult at the moment,'' he said.

The chamber was concerned about service levels for businesses using traditional mail services.

Mr Kirwood understands that a small team of FastPost staff will be retained in the city. Otherwise, mail from Dunedin-to-Dunedin addresses will go to Christchurch for sorting before being returned for delivery.