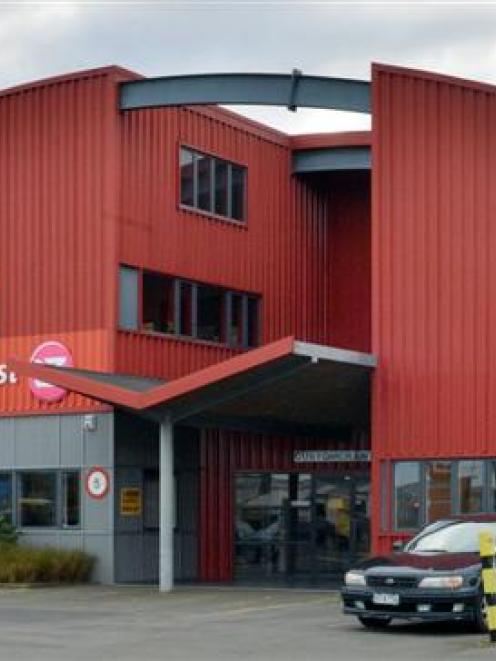 The Dunedin mail centre will close next year, leaving 73 people without a job. Photo by Gerard O'Brien.
With further Dunedin job losses announced yesterday, many are starting to believe the Government is showing its disdain for the city. Business editor Dene Mackenzie investigates.

The expected job losses announced yesterday by Taieri Print, at Fairfield, is another blow to Dunedin's morale following the announcement on Wednesday the city's New Zealand Post mail centre will close next year.

Taieri Print, part of the Kalamazoo Group, may make up to 10 people redundant as it moves to a more digital operation.

The closure of the mail centre costs the city 73 jobs, some of them part-time, and an as yet unspecified number of jobs to go in places such as Queenstown and Wanaka.

The NZ Post jobs are part of 500 being cut throughout New Zealand, although NZ Post says it will create 380 jobs in the expanded mail centres at Christchurch, Manawatu and Auckland. Along with Dunedin's, mail centres in Wellington and Hamilton will close next month.

Chamber of Commerce chief executive John Christie was incensed that NZ Post, and its owner, the Government, did not consider expanding Dunedin's operations rather than those in Christchurch - a city already struggling to attract enough workers to rebuild the earthquake-damaged city, and provide accommodation for those workers.

''It becomes much worse when you can show the things you can do in Dunedin can significantly add to the value of business,'' he said.

Dunedin Labour MPs Clare Curran and David Clark say the latest redundancies at NZ Post is the Government again showing its disdain for Dunedin, with hard-working locals being forced on to the dole queue with little hope of finding alternative employment.

While some new jobs were being created, they were in just three cities. By contrast, most workers losing their jobs were in the provinces.

''These losses follow a string of job losses, most notably over 100 jobs from Hillside Workshops in the last year and 192 from Summit Wool Spinners in Oamaru. Losses have also occurred at O'Brien's in Mosgiel, Delta and Port Otago to name a few,'' Dr Clark said.

''Countless government agencies have been closed or gutted in Dunedin, with remote call centres replacing face-to-face contact for our most vulnerable. The Government has cut 154 full-time state sector jobs in Otago over the last three years.''

Meanwhile, the Government supported SkyCity and speculators in Auckland's property market. While the Christchurch rebuild was providing work for some people, disaster recovery was not a sustainable economic plan.

Ms Curran said Dunedin had to stand up for itself. The city's elected leaders, thinkers and the business community needed to come together and commit to a set of actions to take the city forward in the next decade.

''The National Government has deserted the regions, and it has deserted Dunedin,'' the MPs said. Mr Christie said job losses were the ''hard end'' of the economy as it emerged from difficult times.

''There is no doubt it is tough out there but what we are also seeing is that one- and two-person operations are closing. They don't hit the headlines but we have had several of those and I am concerned about that.''

Often, the chamber found that although there was bad news, some investigation found a brighter side. In the case of Summit, in Oamaru, some workers had been rehired.

He admitted the economic climate was tough in the South but added the city had identified a strategy for generating economic growth.

The Dunedin Economic Development Strategy had also identified areas where Otago was performing poorly against national benchmarking. That included exports and the chamber, and others, were working to lift that performance.

Mr Christie was ''excited'' by the opportunities coming out of Shanghai, Dunedin's sister city. Asked how realistic those opportunities were, he assured the Otago Daily Times there would be significant economic activity between the two cities in the next 12 months.

Four areas - education, food and beverage, tourism and the technology sector - were expected to drive the growth. Otago Polytechnic, the University of Otago, Dunedin high schools and the Dunedin City Council were all working to strengthen bonds between the two cities.

While there were good business stories out there, there were others of companies struggling to adapt to the new business environment. Some businesses had not adjusted quickly enough when the global financial crisis hit, losing capital and being unable to continue.

Hiring was slow in the city, but there had been growth in apprenticeships, something probably associated with the Canterbury rebuild.

Otago's economy was hugely reliant on the rural economy doing well, and that was something most people watched, Mr Christie said. Dr Clark accused the Government of ''sucking the life'' out of small businesses, which were the heart of the economy. Act New Zealand leader John Banks was Small Business Minister but Dr Clark said he had done nothing for small business.

''John Banks has not announced a single new initiative for small business.''

Even Minister of Economic Development Steven Joyce could not name a project Mr Banks had created, Dr Clark said.

The best he could come up with was that Mr Banks attended Cabinet committee meetings.

''Thanks for your efforts, John.''

While Mr Banks had been ''missing in action'', compliance costs and pressures had built up. Small businesses were being charged an extra $45 a year for the Companies Office and for the Financial Markets Authority. Oversight of finance companies should not be a burden on small businesses if they were victims when finance speculators failed, Dr Clark said.