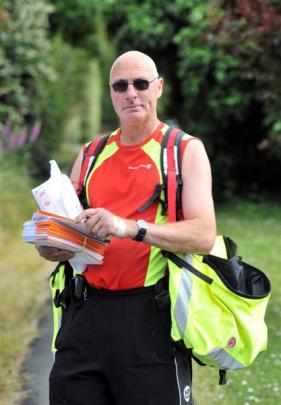 Dunedin posties organise the day's mail by street address before heading out on their deliveries. Photo by Kim Dungey. 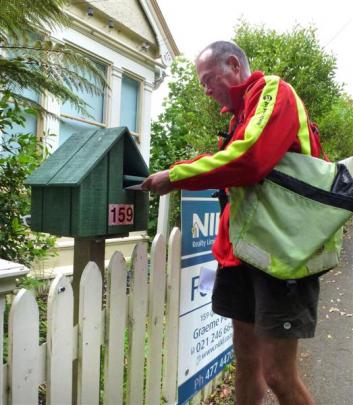 Steve Dyer, seen here in Queen St, started at the chief post office in 1985. Back then, postal assistants collected the mail from trains and posties caught buses to the start of their delivery rounds. Photo by Linda Robertson.

As Christmas approaches fewer of us are sending cards but that is only one sign of a general drop in mail volumes. Kim Dungey talks to the posties whose jobs are on the line as a result.

''They won't touch you,'' a man on the property assures him.

A moment later one of the dogs - he thinks it is part Rottweiler but can't be sure because everything is happening so quickly - latches on to his left hand. As it sinks its teeth into his flesh, Bryant can clearly see one of his tendons.

The 55-year-old has had numerous dog bites but this is one of the most serious. Knowing he needs to get to hospital, he heads to a neighbouring house to drop off his mail bag. A woman wraps a towel around his hand. Still bleeding, he then drives himself the three or so kilometres from Ravensbourne to Dunedin.

Less than 24 hours later, he is back at work - hand taped, body vaccinated against tetanus - sorting the 624 letters and parcels for his hilly, 15.98km run later in the morning and not mentioning the wound until prompted.

''It's still sore and swollen but they won't stitch it in case of infection.''

Others here have had sutures in the thigh and the arm. One reports a bite on the Achilles: ''You should have to have a licence to own a dog,'' a colleague declares, ''or at least a brain.''

But as the posties gather in the large warehouse that is NZ Post's Dunedin delivery branch, it is not only safety issues under discussion. The morning briefing is where the day's work is allocated and the number of letters sent by New Zealanders has plummeted.

With volumes falling by 30% in the past five years, the organisation is reducing its workforce. Up to 2000 staff will go over the next three years. The processing centre in Strathallan St will close by the middle of next year as part of a consolidation of the country's mail-processing network.

Deliveries in urban areas will be cut from six days a week to at least three and posties on bicycles will be replaced by a walking and vehicle service to lighten the load for staff who will increasingly deal with parcels.

As trucks deliver the day's mail to the Portsmouth Dr premises and a loading bay referred to as the bull ring, the impact of all this locally is not yet clear. But it does not stop the posties having a laugh at the expense of those in Wellington. Rumour has it that most of the parcels passing through the new automated kiosks there are ''adult toys'' and that many of those collecting them are politicians.

Karen Sutherland, a cheerful blonde in her 11th year of deliveries, loves coming to work and always thought her job would be safe. Now she is not so sure.

Steve Dyer has heard that 40% of the branch's workforce could go but hopes it will happen through natural attrition and that posties will still work six days a week because different areas will have deliveries on different days.

Working in the university area, he knows young people receive far more parcels than letters, partly because of online shopping.

''So mail is on the decline but there are also things that are improving ...''

Ross Bryant knows first hand the effect that the so-called ''technology wedge'' has had on mail.

In the 1970s, he delivered more than 2000 Christmas items a day in Ravensbourne during the festive season. Today, Christmas is less busy than the end of the financial year.

Bryant was 15 and keen to leave school when a postie's job was advertised in his West Harbour suburb. By the time he reached the local post office, the position had been filled but a month later, in the middle of winter, the postmaster contacted him. The girl who had taken the job had moved from Australia and could not handle the cold. Did he still want it?

''It was just something to get away from school,'' he admits.

''The idea was that I would find something else down the track. But the hours are too good.''

While posties mention the freedom of being outside and paid to exercise, no supervisor looking over their shoulder, it is the early afternoon finish time that is arguably the biggest attraction.

Some are Otago development squad rugby players who train in the afternoons and evenings, delivery leader Lyz Harvey explains. Others have second jobs.

Sutherland started out working part-time in her own suburb when her children were young, accepting bottles of wine from appreciative residents at Christmas and building up such a knowledge of who lived where that her kids joked she was a stalker.

Dyer is able to collect his sons from school and to coach their sports teams, while Bryant enjoys summer afternoons fishing for salmon from his 4.2m runabout and does paid on-call work for the New Zealand Fire Service. Also Ravensbourne's chief fire officer, he is called away from his mail run about once a month but always returns to finish the deliveries.

Although a few posties have mail dropped off to them, most sort it at the centre early in the morning and take it in their own vehicles to the start of their delivery rounds. To keep the loads manageable, couriers leave ''overflow'' bags at secure points along the way.

Staff who begin the day walking can end it on a bicycle or a motorcycle, and routes are swapped weekly.

Pay is based partly on distance and topography, Harvey says, adding that those trudging up Baldwin St, the world's steepest residential street with a maximum slope of 1:2.86, can go through a pair of shoes every few months.

''Dunedin's a bit unique in that 80% of the rounds have got walking in them. That's based on the terrain. We have more hills.''

The posties tell of delivering live bees, dried leaves with messages written on them, tomato sauce sachets that split open in their mailbags and dog biscuit samples with a smell that attracted canines from far and wide.

Some people going away on holiday remove their letterboxes instead of arranging for their mail to be held, Sutherland says. Others use empty paint pails as letterboxes while building new houses and landscaping their sections.

''One letterbox at Green Island that I used to deliver to was [in the shape] of a witch, with a hat on top. It was a pain ... because you really had to push on it to get the mail in.''

''They've got springs on them and they can catch your fingers,'' he says, deftly pushing a letter through one and quickly withdrawing his hand.

While his own is oversized and easily accessed, most people positioning letterboxes don't think about the fact that posties have to deliver mail with one hand because they are holding the rest of the post with the other.

The fit 54-year-old is traversing the steep footpaths of City Rise clad in the shorts he wears regardless of the weather and his red NZ Post polar fleece.

At 7am he was at the delivery centre, sorting the mail by street address and stamping the many envelopes containing referendum voting papers that have been returned from empty halls of residence. He sat down briefly before heading out in his stationwagon but didn't have a coffee because there is nowhere on his run to use a toilet.

''The idea is to keep a steady pace,'' he says as he disappears down a lane.

''You don't want to be too quick because you're [working] six days.

''And if you do the job properly inside, the walk outside is more enjoyable because you don't have to back-track.''

Later he will cover the ''vibrant'' university area where he distributes food parcels from parents at exam time and a ''phenomenal'' amount of baking packed into ice-cream containers.

''I remember I was delivering one time and there was some race on. There were 15 guys coming towards me, completely nude, up Union St. There's always something happening ...''

On the down side, letterboxes there are often stolen or destroyed and the broken glass littering footpaths after street parties caused so many flat tyres that posties now walk the area rather than cycle.

Although posties no longer have time to take elderly people's rubbish out for them or post their mail if they can't make it to a mailbox, they still enjoy interacting with the public, he says, recalling one elderly women who was diagnosed with cancer.

''In the last few months of her life, we became quite important to her and were the main people she saw each day. We took her out for a meal for her last Christmas. We were asked to be pallbearers at her funeral and left money in her will.''

But since he started in 1985, more people have moved into paid work so the suburbs are quieter. A woman pushing a pram is the only person he sees in the first hour today.

Posties are also given the licence plate numbers of stolen cars and asked to look out for lost pets.

''I found one that was the mascot for the Mongrel Mob up in Corstorphine and returned it to them,'' he says, laughing.

''He had a [red] bandanna on and a studded collar. He was a lovely dog.

''Every time they went past me after that, I'd get a [toot] and a big Mongrel Mob wave.''

Ross Bryant's dog story is not such a happy one. Fighting an infection, his hand so swollen he could not form a fist, he had to return to hospital so antibiotics could be administered intravenously. But the wound is ''slowly coming right''.

No doubt he hopes that his employer can also rally.

Bryant has seen postal services reorganised several times in the 39 years he has been a postie. Having witnessed the closure of 432 post offices, including Ravensbourne's in 1988, he is philosophical about this latest round of restructuring.

''We know mail volumes are dropping.

''I wouldn't be happy to lose my job but if it happens, it happens.''

Fact box
• NZ Post employs 1919 posties to deliver letters, cards, parcels and registered mail requiring signatures.
• Dunedin, with its hilly terrain, has 34 of the country's 175 walking-only rounds.
• The Dunedin and Mosgiel delivery team has 54 delivery rounds and 79 employees, 73 of whom are posties. The rest are team leaders and support staff.
• Posties walk up to 18km a day and cycle up to 40km. They can carry 12kg when walking, 28kg by bicycle and 200 to 250kg by vehicle.
• Annual mail volumes, at 771 million items, have declined by a third since 2006, with a 7.5% drop (63 million fewer items) in the past year alone. Over the next five years, parcels are expected to increase by 10 million items and letters to fall by 252 million.
• Alternate-day mail deliveries in urban areas will be introduced after July 2015.