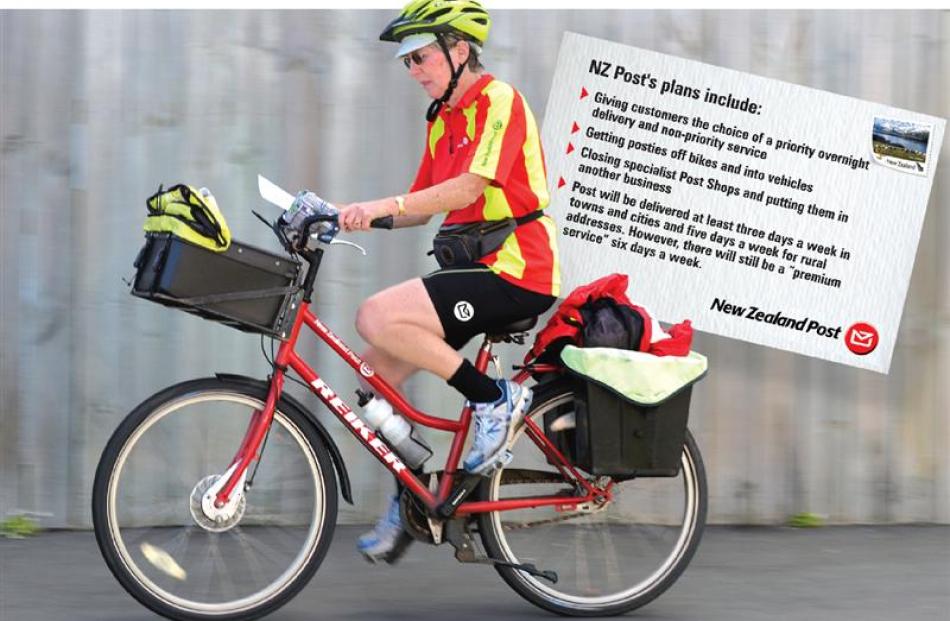 Dunedin posties are more worried about still having a job than how they will deliver the mail in the future.

In announcing 1500 to 2000 jobs would go across New Zealand Post in the next three years, the company's chairman, Sir Michael Cullen, also indicated the end of the cycling postie.

The regional impact of the job cuts would not be known until the second half of next year, a spokesman said.

Dunedin postie and Engineering, Printing and Manufacturing Union (EPMU) delegate Graeme Gibson said while posties understood the general picture of the changes, they did not know how many jobs would be left when the company finished the exercise.

''We've been left waiting. All we know is in the future there will be less jobs but there is no way to predict how many will go.''

It was that uncertainty that worried them, not their method of delivering the mail. They also did not know what the company intended by the delivery changes to accommodate the increased growth in parcels, he said.

''Do they mean more posties on motorcycles or small vans?''We can learn a different way. Posties are able and adaptable people.''

Dunedin postie Jane Gibbs said posties on bikes were part of the fabric of New Zealand so it would be sad to see them go.

''I enjoy the exercise part of the job.''

EPMU postal industry organiser Joe Gallagher said the announcement was ''simply cruel. The scale of these cuts has come as a real shock to our members.''

Yet again, New Zealand Post and the Government made the announcement out of the blue, he said.

''These plans have clearly been in the pipeline for a long time, but the people affected by them, including all New Zealanders who use the postal service, have been kept in the dark.''

Staff now faced an uncertain future but also had time to plan for the future, he said.

''The people who will lose their jobs will have a hard time finding work in the current economic climate. Regional communities will be hit hard.''

The proposed job cuts come on top of the closure of the Dunedin mail processing centre with the loss of 73 jobs, announced earlier this year.