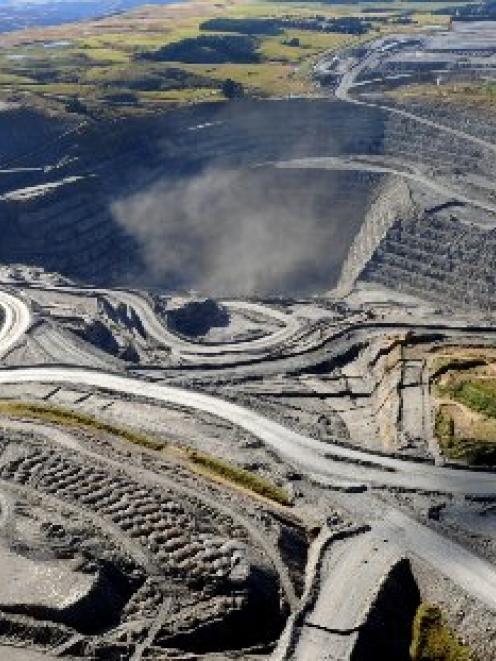 Macraes Mine.
Oceana Gold announced cutbacks at its Macraes mine yesterday as the company reduces operating expenditure by about $US100 million ($NZ125 million) over the next 18 months, as part of a company-wide review of operations.

In a statement to the Australian stock exchange yesterday, the company said it would defer pre-stripping of material above gold-bearing ore around its Frasers pit at Macraes.

This follows last month's announcement the company planned to mothball its Reefton operations by mid-2015.

The company said in yesterday's statement operating expenditure over the next 18 months would be reduced by about $100 million and would include the savings generated from deferring the final cutbacks at Reefton and Macraes, plus other operating and capital savings.

The company-wide review was ongoing to identify additional opportunities to improve cashflow from operations.

Oceana employs nearly 1000 staff in New Zealand - up to 700 at Macraes and 260 in Reefton - but any effects on staffing were not addressed in the half year to June result yesterday.

With global spot gold prices plunging towards near uneconomic levels of $1200 an ounce recently, miners globally are cutting back expenditure by billions of dollars.

''Like the rest of the gold-mining industry, the company is currently faced with tougher economic realities that require a proactive approach to ensure a healthy business plan,'' Mr Wilkes said.

Oceana shares on the NZX were down 2.8% and finished at $2.05 yesterday, but the NZX had closed before the announcement was made on the ASX.

Oceana is triple listed, in Toronto, Australia and New Zealand.

''With cash flows increasing over the next few years and with significant cost reductions at our New Zealand operations, the company is well positioned for the new economic environment in the gold industry,'' Mr Wilkes said.

He expected New Zealand production to ''progressively increase'' during the rest of the year, with the fourth quarter being the best in 2013.

For its half year to June, Oceana reported an after-tax loss of $US63.4 million, compared with a $US3.1 million loss the previous year, because of a non-cash write-down of assets, the ''significant decline'' in the gold price and the shortening of Reefton's mine life.

Revenues were up 29.4% to $US226.8 million, boosted by more gold sales but offset by falling prices.

Gold production rose from 105,608 ounces a year ago to 129,261 ounces, boosted by gold sales out of New Zealand and Oceana's gold and copper mine in the Philippines going into full commercial production from April.