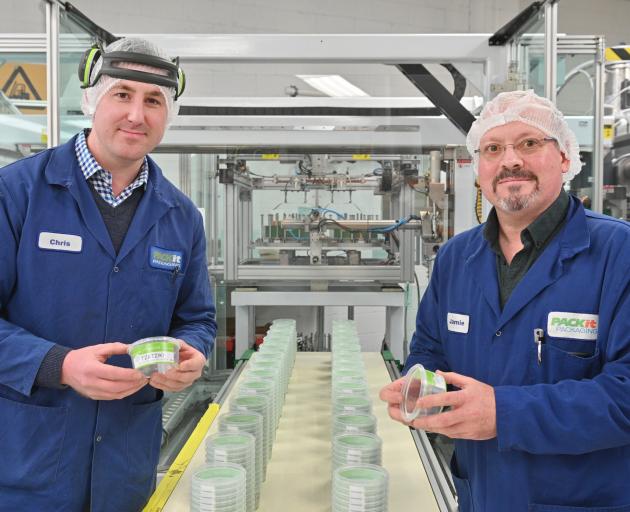 Packit Packaging operations manager Chris McBride (left) and general manager Jamie Hodgins inspect one of the containers they make. PHOTOS: LINDA ROBERTSON
Packit Packaging are making the case they are the good guys of plastic. The Dunedin manufacturers produce food packaging using number five plastic and its managers argue it is the better devil of the plastics world. They talk to business reporter Jacob McSweeny.

Jamie Hodgins wants people to think about the number five when they are shopping.

That is because almost all of what his Packit Packaging business makes are polypropylene food containers — typically identified with the number five inside the arrowed triangle of the recycling symbol.

He wants more people to buy and recycle number five products (made of polypropylene) because they can be recycled here into other products such as pipes and automotive products.

When China refused to take recyclable materials from around the world in 2018, this country was not prepared, Mr Hodgins said.

Councils collected recyclable material and bundled it up with hopes to sell it down the track. 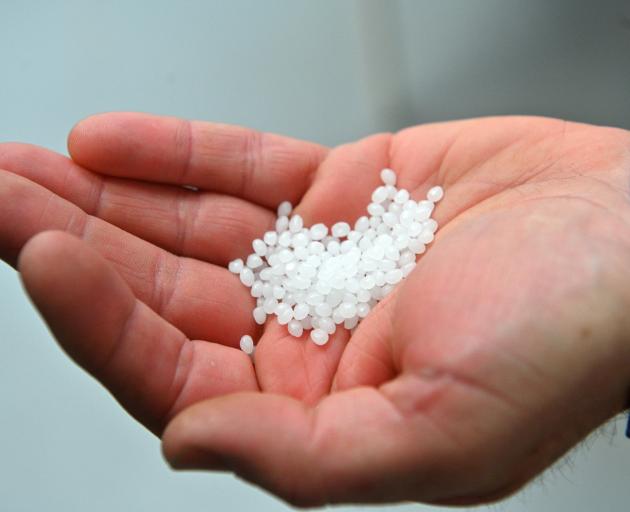 The raw polypropylene pellets they use to create the number five products.

Mr Hodgins says a lot of those bundles have ended up in landfills.

"Up until then plastics was ... you went to the wheelie bin or whatever. It went away, out of mind and out of sight. Now it’s New Zealand’s problem and our problem too, as a business."

He wants people to know the plastic he makes can be recycled — and it is done here. Packit uses a recycler in Christchurch that turns what they make into a slightly lower grade.

The food packaging Packit designs and manufactures from its Kaikorai Valley Rd premises are injection-moulded containers and are found throughout New Zealand supermarkets.

Their customers include Foodstuffs’ Pams brands of baking goods and Arataki Honey.

They have been in business for about 20 years and employ 13 staff.

Next week is recycling week, and Mr Hodgins and Packit’s operations manager Chris McBride are speaking out for more public understanding around why number five plastics are a good option if you have to use plastic.

"Predominantly our business has been in number five because polypropylene is such a good material for packaging," Mr Hodgins said.

The number five recycling bin Packit had at the Dunedin central New World collected a range of items including blocks of wood and a pair of pants.

"It’s got good clarity, it’s got good stiffness. You can decorate it easy, you can make it into different shapes easily."

It also has good shelf life and good barriers to oxygen getting into whatever is inside.

Mr Hodgins and Mr McBride say they are often frustrated by misconceptions in the public about what can be recycled.

"We own a plastics company, but ultimately we have to reduce our use of plastics," Mr Hodgins said.

"Reduce ... things like your six pack of yogurts, which are made of polystyrene. They’re not recyclable at all. Anything with polystyrene, PVC.

"A bane of mine is ice cream containers now in cardboard — Cadbury’s, Ben & Jerry’s — cardboard with a plastic lining, it can’t be recycled and goes straight to landfill. The consumer thinks ‘great I’m buying a cardboard container and it’s recyclable,’ but it’s not."

Mr McBride said he has taken a McDonald's cup and peeled layers back on it to reveal thin films of plastic, making it not able to be recycled.

There has also been a public backlash against plastics, which made things "hard going" for Packit, Mr Hodgins said.

"At the end of the day they see all the stuff in the media, you have a poor old tortoise with a straw up its nose, there’s a big mass of plastic floating in the ocean.

"That’s actually not created here, but is a plastics problem. As a manufacturer we want to be as responsible as possible with what we’re making."

Mr Hodgins does believe more people are getting educated about the plastic they are using.

"If you’re passionate about it people know what the materials are. They think ‘yep I can recycle that but If I buy that product I can’t recycle that’."

According to research he has seen only about half of New Zealanders know what they can and cannot recycle. He wants to see more than 80% of New Zealanders confidently purchasing products they know can be recycled.

The thinking behind it was for people buying their number five products to have a place to give that plastic container back to be recycled.

They spoke to several supermarkets in Dunedin about it and they were interested, but they did not want to have to pay for the service.

"It’s a labour of love, it’s not a money-making venture," Mr McBride said.

People were mostly depositing polypropylene products, but there was the odd block of wood and someone put a pair of pants into the bin.

Packit are encouraging their clients to take pride in the fact they are using number five plastics.

"Most of the symbols are very small and on the bottom of the container.

"We’re encouraging our customers to start putting the number 5 in bigger font on the side of their artwork."

When number five plastic is recycled it goes to a recycler that breaks it down to plastic chips before being extruded down to pallets — what Mr Hodgins refers to as their raw material.

"From then it will go out to a pipe manufacturer or a carpet manufacturer and they’ll turn it into something else."

When products are recycled at the moment it is done in a way that means it cannot be used for food packaging again.

Mr Hodgins said he was excited by technology becoming available overseas where the polypropylene is processed in a way that guarantees chemicals are removed and it can be used for food packaging again.

"That technology is just becoming available overseas, and that’s where we need to move to in the next year or two. So the plastic is not being downgraded, it’s being recycled and reused for its original purpose."

Mr Hodgins said Packit has a bright future, with a collaboration under way with another Dunedin company to build a "100% recycled component that’s going to be out in the environment for five to 10 years".

"I can’t really say too much right now because it’s confidential."

$1.5million to get merino plasters going

"They spoke to several supermarkets in Dunedin about it and they were interested, but they did not want to have to pay for the service", pretty typical really even though the supermarkets have been gouging their customers since ages ago and make quite healthy profits from doing so.

How much of the no.5 plastic is actually recycled in NZ? According to Plastics NZ, each New Zealander consumes approximately 31 kg of plastic packaging every single year, and only recycles 5.58kgs. Who is to blame? The consumer? The councils? The government? Maybe the supermarkets? Everyone but the manufacturer of no.5 plastic apparently!
Plastic pollution is everywhere and New Zealanders are no different to anyone else. To try and shift the focus to a turtle with a straw up it's nose and then say we are not to blame is purposely misleading. Plastic of all sorts are a great threat to our ecosystems and instead of congratulating yourselves for making a slightly less damaging plastic just promote and educate how to reduce the environmental impact until a better alternative can be found.
Half of all plastics ever manufactured have been made in the last 15 years.
Production increased exponentially, from 2.3 million tons in 1950 to 448 million tons by 2015. Production is expected to double by 2050.
Every year, about 8 million tons of plastic waste escapes into the oceans from coastal nations. That’s the equivalent of setting five garbage bags full of trash on every foot of coastline

I'd be interested to know if companies selling products labelled with the recyclable triangle, which cannot be recycled in NZ nor are accepted for recycling overseas, are in breach of New Zealand law. Essentially, an unrecyclable #7 plastic with the triangle on it is misleading labelling. I'd love to see some big posters in supermarkets showing what actually IS recycled so we can make a properly informed decision. And thanks to this article, no more little yoghurts for us!