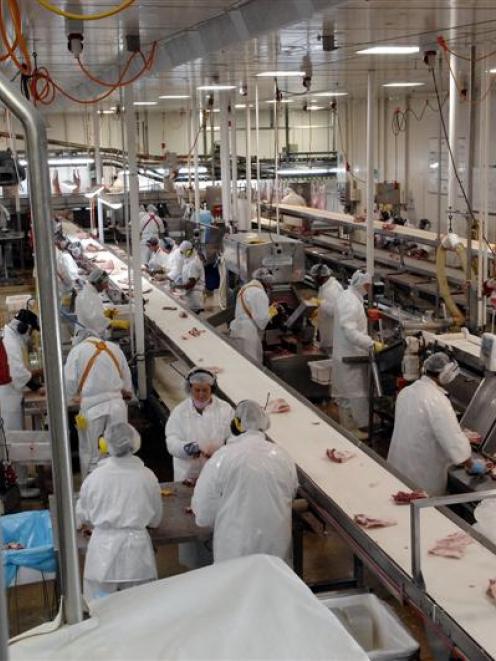 Meat workers could have a season up to seven weeks shorter than normal, union officials warn. Photo by Linda Robertson.
The pay cheques of the country's 22,000 meat workers will be thousands of dollars lighter this year with their seasonal jobs likely to be cut short by up to seven weeks because of falling sheep numbers.

Union officials say that traditionally all sheep-processing chains were working by the middle of December, but this season has started up to five weeks later than usual and is expected to begin winding down in late March, two to three weeks earlier than usual.

A combination of a six-million decline in the lamb kill over the last six years, slow pasture growth this season and the fact farmers have been holding on to lambs longer to target heavier weights leads many observers to predict the 2010-11 season will be short and sharp.

The Otago-Southland secretary of the New Zealand Meat Workers Union, Gary Davis, said the eighth sheep processing chain at the Alliance Group's Lorneville plant near Invercargill was yet to start work, and Canterbury plants were working only four days this week.

"A lot of workers are a month behind where they were last year," he said.

He expects large numbers of lambs will reach slaughter weights at the same time, prompting a rush for killing space.

The union's national secretary, Dave Eastlake, said the number of lambs processed so far this season was 18% behind the same time last year, and the new calendar year had also started slowly.

"January is usually full on, but depending on the weather, can be a bit difficult.

This seems to be one of those years."

Canterbury processing plants were working four days this week and Mr Eastlake said there had been no overtime or Saturday work this season.

Wage packets have been gradually getting smaller - as the national sheep flock declines - and last year Mr Eastlake said Southland meat workers did not work on Saturdays at all.

"That was last year and we're not expecting much out of this season."

Beef and Lamb New Zealand has forecast one of the largest falls in the number of lambs weaned in 21 years, and expect one of the lowest kills in modern times of 19.5 million - six million fewer than the 2005-06 season.

It is estimated last September's storms in Southland, South Otago and parts of the North Island killed 1 million lambs and accentuated a trend of continued land use change to dairying and dairy support as farmers chase higher returns and display their lack of confidence in sheep farming.

While many farmers have fewer lambs to sell, the shortage has pushed up the price they receive, from an $80-a-lamb average last year to around $100 this season.

However, Mr Davis said that was cold comfort to meat workers, who he said were pawns in an industry that was dysfunctional and had excessive processing capacity.

"The whole industry is a mess.

There are too many plants, falling stock numbers and nobody wants to sort it out.

Our workers are pawns in the game," he said.

The union has been working with the Ministry of Social Development to find off-season work for Otago-Southland meat workers in the dairy and horticultural industries and publicise the workforce's availability to other potential employers.

"As the seasons get shorter, they will fit into roles easier than in the past.

It could reach a point where they won't need as many immigrant workers because meat workers can do it."

There are an estimated 5500 meat workers in the area from North Otago to Southland and Mr Davis estimated 100 travelled to work in meat plants in Australia and Europe during the off-season.

Those who could not get other part-time work relied on the unemployment benefit.

Mr Davis said there was a risk experienced staff would react to short seasons by finding alternative work.

"How long can they last in an industry when they get three to four months' work?"