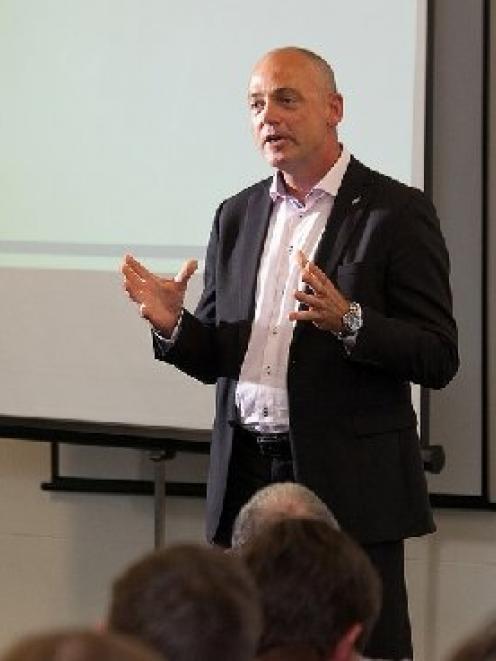 Fonterra chief executive Theo Spierings addresses a group of farmer shareholders. Photo by Fonterra.
Fonterra will have to "go back to the drawing board" to resolve redemption risk and also put key projects on hold if Trading Among Farmers does not proceed.

As D-Day for the controversial scheme looms, with the final vote on Monday, Fonterra's chief executive Theo Spierings says the co-operative will go backwards without it.

A "no" vote did not mean going back to the status quo. Things would change, Mr Spierings said in a statement.

"We will need to go back to the drawing board to resolve redemption risk and we will also have to put on hold key projects to increase the volume and value of our dairy exports.

"We will have to come up with a plan B to resolve redemption risk. That could mean ... talking to the Government about new legislation.

"Given we've already spent more than three years developing TAF, this would put us in a five-year holding pattern."

Fonterra's refreshed strategy, outlined in March and amounting to more than 100 projects, gave the co-operative a clear path forward but that could not be implemented without a stable capital base.

"We will have to pursue fewer projects as we will need to hold back more capital because of redemption risk. Our competitors will take advantage of this and we will lose our window of opportunity to grow returns."

Without TAF, the Government would require Fonterra to return to a fair value share, instead of its present restricted market value.

That sort of higher value would mean it would cost farmers more to share up and Fonterra's redemption risk would become much bigger.

"Whatever the result of the vote, it is for the board and management to respect what we determine as shareholders."

Shareholders should "forget the parochialism and the lobbying" and think about their own philosophy and how that sat with their vision of Fonterra's future.