The end result is that nine engineering and manufacturing projects will share a $28million fillip - courtesy of the regional development minister's Provincial Growth Fund.

Acknowledging that Dunedin and other parts of Otago had been "neglected" by the central government in the past, Mr Jones said it was high time for intervention in the city, helping it get back "on track" as a major economic contributor to the region.

In keeping with his railway theme, a major chunk of the cash - almost $20million - will go towards re-establishing KiwiRail's Hillside workshops, as a mechanical hub and heavy engineering facility to service KiwRail's trains.

The regional development minister said the investment had aligned with the Government's plan to invest more than a billion dollars in rail.

"Hillside is the only heavy lifting rail facility in the South Island, so it is vital to KiwiRail's business," the minister said.

KiwiRail CEO David Gordon said the money would be used to revitalise the site's main workshops, to maintain and upgrade rolling stock and potentially fit out passenger cars again.

He said the number of staff would be ratcheted up from the current 23 to around 65 within three years, and as many as 100 longer term.

An additional $8million would go into a suite of engineering firms and manufacturers across the city.

The lion's share of that, $5.8million, was allocated to robotic innovation company Scott Technology over a term of six years.

Scott Technology managing director Chris Hopkins said the money would be used to set up an agriculture technology "agritech" business unit, dedicated to automation solutions and services for food processors, producers and suppliers.

"We are aiming for fast commercialisation of evolving technologies specifically into the horticulture and agriculture industry."

He said the financial injection would allow Scott Agritech to explore opportunities across dairy, automatic weeding and spraying in horticulture.

"We've had some engagement with horticulture in Australia, using robots for vine pruning, so we think this could translate really well in Central Otago," he said.

"The idea of approaching the fund was to accelerate selective commercialisation and gain "fast traction" in the marketplace."

He said in addition to providing a technology boost to the local industry, the funding would allow for job creation stemming from investment in advanced robotics training facility for customers, staff and external students.

On balance, 15 new skilled jobs would be created in the new division, to be based at the Dunedin facility which currently houses around 100 employees.

The Kenmure headquarters had also recently expanded, doubling its space with the addition of 1500sqm of factory and 800sqm of office space.

Mr Hopkins estimated the investment could bring around $30million worth of commercial benefits to the agritech industry, initially in Otago and the South Island.

The growth fund also committed just under half a million dollars to the Southland and Otago Regional Engineering Collective (Sorec) and another $2.5million to firms under the Sorec umbrella.

Sorec spokesman and Farra Engineering chief executive Gareth Evans said the money would be used to help "re-energise and challenge" the sector.

"As a sector we've been remiss in not supporting our aims as an industry and not upskilling or promoting apprenticeships.

"So Sorec is about collaboration - banding together and charting a brighter future, ensuring we have the training facilities in place and the programmes to support that training." 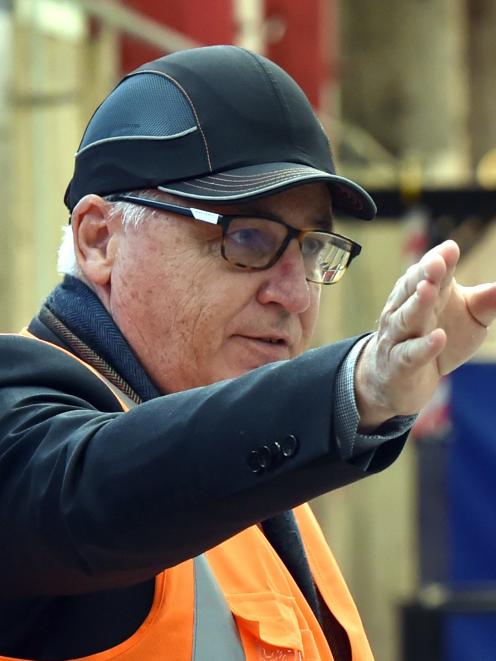 KiwiRail CEO David Gordon.
Mr Evans said funding would initially go towards the overheads of setting up a structure for the entity, employing a full-time resource and bringing on board many of the 150 companies Sorec had engaged with during the early "research" stages of the organisation.

Heavy industrial design engineering firm Farra Engineering has also benefited from funding to the tune of $325,000, as partial funding for the purchase of a "horizontal floor borer" machine for use with South Island power generators.

"As one of the largest machines of its type in New Zealand, it will help us machine extremely large work pieces on site, for example headcovers on hydraulic turbines," Mr Evans said.

It has been involved in innovative projects including the construction of specialist "underground refuge chambers", built to provide a safe haven for between six and 12 personnel in underground emergencies.

Mr Olsen said the new equipment would allow the company to expand into other areas, as well as potentially international markets.

United Machinists and Red One Fabrication

Funding allocations to United Machinists and Red One Fabrication - $520,000 and $93,000 respectively - would also be used for engineering equipment to expand its production capabilities.

United machinists managing director Alex Ramsay said the investment would be used to increase capacity with a single "multi-task" machine.

"This gives us increased flexibility which is important in a contract machine shop like ours, also allowing us to `plug and play' robotics."

Dunedin tech company Bison Group was given a $110,000 grant towards creating a "shop window" demonstration space to showcase its product range.

The company, founded and run by brothers Greg and Mark Fahey, has developed a strong international niche in the portable container scale market, with demand from major multinationals and international military customers, including the United States Air Force.

In support of the manufacturing investments, shared business space Petridish Ltd was provided with a $240,000 grant towards equipment and salaries for its "Makerspace" area, allowing manufacturing businesses to trial and test new products.

Economic Development Minister David Parker said the funding would support a "step change" in productivity and efficiency, leading to jobs and a renewed optimism in the important manufacturing sector.

"Dunedin has long been known as a city of innovators.

"The growth fund recognises that our regions are home to some of our most creative thinkers, so our focus on the manufacturing and engineering industry recognises our pioneering spirit."

Note the missing person from all the hoppla about investment in jobs for Dunedin. The anti development mayor is true to form and missing in action. Money is one thing, getting buildings built or rebuilt and jobs delivered is quite something else. It will be interesting to see how much of an impediment DCC and councilors are to getting these projects delivered

It is really sad the amount of business investment in Christchurch compared to Dunedin. One place has an easy to deal with council, Dunedin doesn't.