Dunedin's waterfront development plan has been given a financial shot in the arm, despite a funding allocation of nearly $20 million falling short of what was sought.

The allocation was just below the $20 million cap, above which bids require a more detailed - and time-consuming - sign-off by Cabinet.

The funding would pay for the first stage of groundworks, infrastructure services and the development of public space which was envisaged as part of the project. 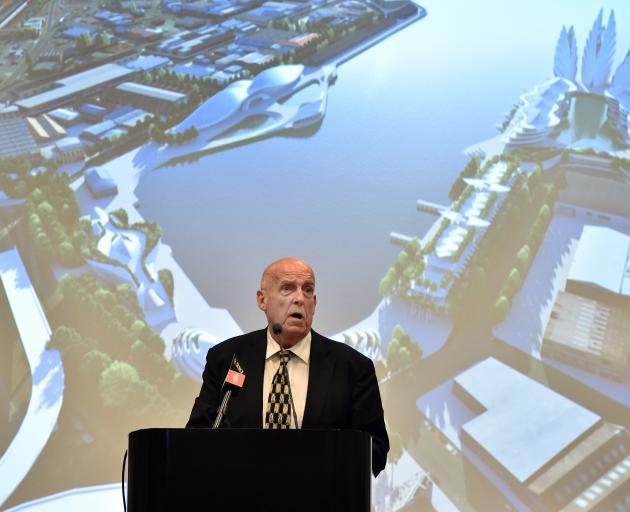 Dunedin City Council planning and environment committee chairman Cr David Benson-Pope says a $19.9 million Provincial Growth Fund allocation for Dunedin's waterfront plan will give the project momentum. Photo: Peter McIntosh
The work would focus on the northern side of Steamer Basin, nearest to the planned $20 million bridge link and the University of Otago's planned Sustainable Futures building, which was expected to be the first major development on site.

Developments on the southern side of the basin - including the envisaged hotel, apartments and cockleshell building - were expected to follow in subsequent stages, council chief executive Sue Bidrose said.

The announcement came as Mr Jones confirmed publicly, for the first time, the Dunedin City Council had asked for $100 million for the waterfront development plan.

Those hopes had been scaled back, initially as former mayor Dave Cull was cautioned the request would leave the fund unable to allocate money to other worthy projects in Dunedin and Otago, Mr Jones said.

The council later agreed to drop the cockleshell building from the PGF bid - but not the overall development plan - as it did not offer the same potential to drive economic development, Dr Bidrose told the Otago Daily Times.

That left the city's waterfront partners with a revised bid seeking $44 million from the PGF, and yesterday's announcement was a little less than half of that.

Concept plans for the northern side of Steamer Basin. Photo: Peter McIntosh
DCC planning and environment committee chairman Cr David Benson-Pope said he ''would have liked it to be more'', but the funding at least gave the project momentum.

''It's a vote of confidence in the wider concept, and it also means we can get on with more detailed design on what we can achieve with that sort of money.

''I'm confident it's enough to do the infrastructure and preparations of the building platforms on that north side,'' he said.

The rest of the project would have to wait, but the change was one of rescheduling, not scaling back, he said.

A further bid for PGF funding, to help pay for stage two of the project, could follow in time, he said.

''I think this will give us the opportunity to prove the concept, if you like, and I would anticipate if we do that, and do that quickly, the answer would be yes.''

Mr Jones - an enthusiastic supporter of the project - yesterday described it as ''ambitious'' and said it would ''start the transformation of Dunedin's waterfront into an accessible destination for locals and visitors''.

''This will bring people into the area, which will encourage economic growth and job creation,'' he said.

Mr Parker, speaking to media after the announcement, said it was unlikely a further funding allocation would be made to the waterfront project before the next election.

Asked if that was a possibility after the election, he would only say: ''Time will tell.''

Despite that, the reduced sum awarded in no way reflected any level of concern with the waterfront project, he said.

It was a ''great initiative'' that would deliver construction-related jobs and improve a ''long-neglected part of the city'', but other projects were deserving, too.

''If we'd supported that [the waterfront] in it's entirety, we wouldn't have been able to do these other good things.

''Overall, we think we've got the balance right.''

"the request would leave the fund unable to allocate money to other worthy projects in Dunedin and Otago".

I actually find that statement extremely annoying, as other regions in NZ, particularly in the north, have had huge lump sums given to them, and by that statement Otago as a whole has only been allocated a certain amount. Are we not as important as the North Island?

I'm not complaining about the 'free' money, it's an awesome initiative and will certainly help many places around NZ that get some of it, but it's long been said on social media that the South Island has been rather forgotten about/ignored in the PGF compared to the North.

Pie in the sky-a mirage fit for Sydney, maybe Auckland, but Dunedin with 135,000 people? Have we lost our collective minds? we already have one $300 million white elephant that will take 30-50 years to payoff with our rates, just in time to pull it down again. Put this plan to a vote/referendum before the DCC enslaves us again with their plans to make them feel "big".

Negative viewpoint. But at least consistent.

This along with the Hillside rebirth is fantastic but I would along with many love to see the trams running up and down between the exchange and mornington, which will both come alive with more cafes, summer alfresco dining etc. The trams have already been restored by dedicated enthusiasts, the housing of them is all sorted, now just need the PGF to put in a track to the side of high street and with the right financial management of the tram rails there may even be scope to pay it back over time.....

...and while we're talking rail, a commuter train from Mosgiel would relieve a lot of traffic pressure and parking in the city. All these big projects are going to have a huge inpact on traffic flow in the city. I use the word 'flow' loosely of course.

OtagoIdeas & Mehavesnoname have basically got it right. It's the same old boy's network method with tax money being spent on stupid projects that bring no income and do not pay for themselves.