'Insane' to cut marine science at this point

Supporters of the Marine Science Department demonstrate at the University of Otago last week. PHOTO: GREGOR RICHARDSON
The University of Otago's contribution to the Dunedin waterfront development plan risks being undermined by "insane" cuts to the institution's marine science department, a key figure behind the project says.

The warning came from Dunedin businessman Ian Taylor, who said the university's proposed cuts did not make sense at a time of increasing focus on climate change, sea level rise and sustainability across the globe.

The cuts also risked eroding the role to be played by the Sustainable Futures building, which was at the centre of stage one of the city's waterfront development plan, he said yesterday. 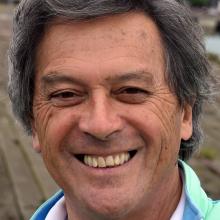 Ian Taylor
Mr Taylor was commenting a day after it was announced $19.9million from the Provincial Growth Fund would be allocated to stage one of the waterfront project.

That was well below the nearly $100million the Dunedin City Council - on behalf of the city's waterfront project partners - had asked for, but Mr Taylor said the outcome was still "fantastic" for the city and the project.

It would pay for seawall and wharf upgrades and the preparation of building platforms on the northern side of Steamer Basin.

That was intended to pave the way for the Sustainable Futures building, to be built by the university on land gifted to it by Port Otago earlier this year, as the first new building on the waterfront.

Mr Taylor said if there was not enough money to prepare both sides of Steamer Basin for development at the same time, the northern side - and the university's building platform - was "the perfect place to start".

The funding announcement came just weeks after the university unveiled a proposal to make cuts in its marine science department, to address a $4.2million deficit.

Eight academic positions were to be reviewed, and three cut, while two vessels would be sold and lab positions changed.

Mr Taylor said the changes made no sense given the environmental challenges facing the globe, and when the city had a chance to position itself as a world leader in tackling those.

Intellectual property rights generated by such research were a value for Dunedin, which meant the university needed to "step up", not cut, he said.

"If we're taking about sustainability and climate change and ocean rise, one of the huge assets is the marine science [department]. And if the university is thinking of downsizing that ... it's just insane."

Both the university and Mr Taylor are among signatories to the memorandum of understanding signed by supporters of the waterfront development plan.

The university would not be drawn on Mr Taylor's comments yesterday and maintained it was not yet in a position to announce any plans for its waterfront site.

Instead, deputy vice-chancellor research and enterprise Prof Richard Blaikie, in a statement, welcomed the PGF funding and said it would allow the university to begin work on detailed planning and a business case for its building.

That would allow the university to "advance nationally and internationally important" work on sustainability, he said.

The university would also not be drawn on whether the building concept had scope for a public aquarium, having earlier this month ruled out any "current" plans for such a facility on the site.

That was contradicted by Economic Development Minister David Parker on Wednesday, when he told media he understood the university would be "building a research and aquarium facility".

... but aren't the DCC building a giant replica of a muscle in the harbour basin to ensure everyone knows what a muscle looks like ???

This must count as a hi-tech "marine science" project ... just like the whales teeth on Portsmouth drive !!

Some people are never satisfied ...