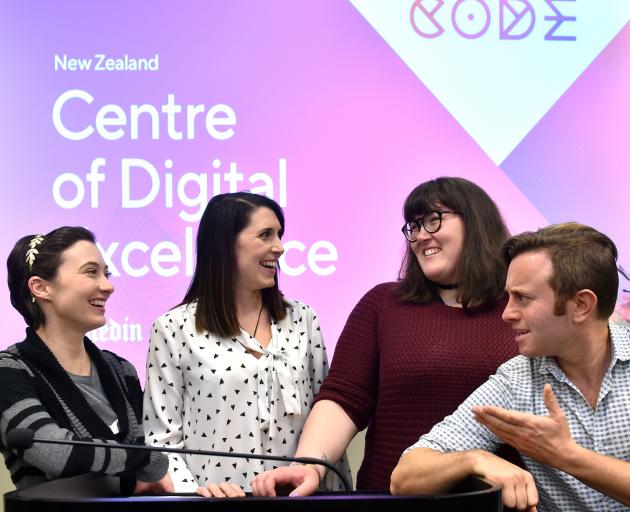 CODE would be set up over the next six months, he said, originally falling under the umbrella of Enterprise Dunedin, which would establish governance and support.

Enterprise Dunedin director John Christie said the agency had done a lot of work in the run-up to the announcement, working with tech sectors in Edinburgh, Sweden and Japan and other global centres of gaming innovation.

He said the aim was to have the hub up and running by next year.

''It wasn't just about coders, but graphic designer, artists and storytellers.

''There are lots of pathways to get into games development,'' he said.

Chairwoman of the NZ Game Developers Association Cassandra Gray said the interactive media sector in New Zealand was already a fast growing part of what was one of the key growth industries of the global economy.

She said that, unlike the film industry, the sector had received little government support to date.

According to the recent joint industry and government report ''Interactive Aotearoa'', the New Zealand industry generated earnings of $143 million last year, though revenues have increased 39% year on year for the past six years, meaning returns would break the $200 million mark for 2019.

''We know it has the potential to grow into ''at least'' a billion-dollar industry and with backing, could grow beyond that,'' Ms Gray said.

Runaway Play managing director Zoe Hobson said the investment could be a real kick-start for the local industry.

''We are all about collaboration and knowledge sharing, so this will give us the space and the place to develop and share ideas as well as bring talent through the system.''

Both the University of Otago and Otago Polytechnic said the investment would usher in opportunities in the educational sector, given the ''growing importance'' of the digital economy to future work skills.

''Creative thinkers, people who possess not only hard skills but much-sought-after soft skills, are crucial to the development of this sector,'' Otago Polytechnic CEO Phil Ker said.

He said the university had created a visiting chair in computer game development position for the duration of the CODE funding.

''This will allow experts who span the academic/industry interface to spend time here to contribute to teaching, research and industry engagement.''

According to the recent ''Interactive Aotearoa'' report, about two-thirds of all Kiwis play video games regularly and interactive entertainment has a strong influence on our digital literacy.

The report noted that interactive games were expected to grow at a 9% compound annual growth rate over the next four years, making it the world's fastest-growing media industry and eclipsing the 2.5% annual growth of the global movie sector and its revenues of $136 billion.

''Dunedin is doing some great stuff and the advent of these kind of hubs means we can act as an ''incubator'' of talent, moving people from ''startup'' to AAA developers.

''It's all good stuff. I mean I didn't move here because of the weather.''

Otago Chamber of Commerce chief executive Dougal McGowan said it was a welcome investment into a ''weightless and scaleable'' industry sector given ease of software export, so was more good news for the city.

''This with the gig advantage highlights the excellence we currently have in this field but also the opportunity to grow this further.

He said local business would look forward to getting the detail in behind the announcements, how money would be allocated and in what form.