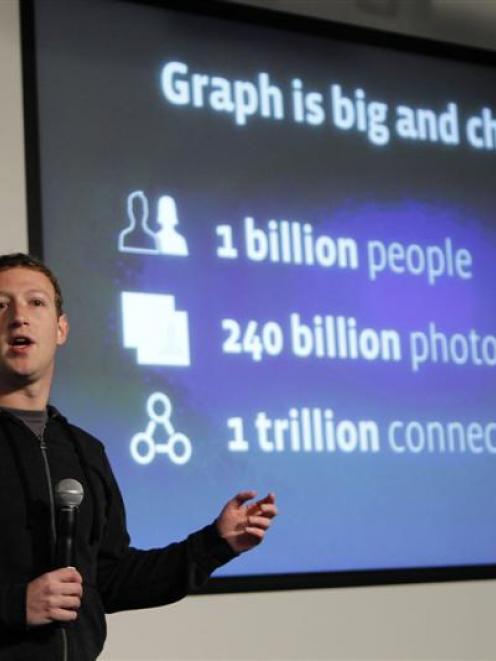 Facebook founder Mark Zuckerberg introduces a new feature to the world's most popular social medium. Photo by Reuters.
Investors are likely to regard the launch of Facebook's Graph Search as ''too little progress'' in the highly lucrative market of web search, Greenlight chief operating officer Andreas Pouros says.

The function will be available at first only as ''beta'', or trial, for just hundreds of thousands of its more than one billion users. It will let users browse mainly photographs, people, places and members' interests. Facebook founder Mark Zuckerberg stressed that people could only sort through content shared with them, addressing potential privacy concerns.

In an email to the Otago Daily Times, Mr Pouros said the new smart search engine would allow people using Facebook to more quickly find answers to questions about friends in their ''social graph''.

But he described the announcement by Mr Zuckerberg yesterday as a story of ''three halves''.

''On one hand, users will be happy to get this new functionality that Facebook is calling `Graph Search'. It is innovative and powerful and will allow people to search within Facebook, albeit restricted to what they can see and read right now.''

It allowed the user to search for people, places and interests using structured queries such as ''Friends who like Star Wars and Harry Potter'', or more usefully ask ''Which restaurants do my friends like in London'', Mr Pouros said. Greenlight is a digital marketing agency based in London.

Ordinarily, the user would ask that question by posting it on their wall. Now, the tools were there to allow the user to just search.

''Innovative, very cool and the first major addition of functionality Facebook has seen since Timeline.''

However, Mr Pouros said the announcement was unlikely to be enough to allay investor concerns over Facebook's commercial focus.

Many had expected Facebook would have launched a new mobile phone or thrown down the gauntlet to Google and challenged the company in web search supremacy; neither of which happened.

''Web search is a touchy subject.

''As everyone knows, it is a hugely lucrative market and one Facebook was expected to enter. Graph Search may well be a precursor to that but I fear investors will suspect that it's too little progress,'' he said.

Somewhere in the middle, businesses were likely to become more visible within Facebook, given that many of those searches would bring up their pages in search results. But that might simply offset the reduction in visibility brands had experienced due to Facebook's ''promoted posts'' mechanism that limited the exposure of brand posts on user newsfeeds where businesses were prompted to pay for their post to reach a wider audience. Also, it was unclear if or how Facebook would make money from Graph Search, Mr Pouros said.

Facebook shares, which had climbed 15% since the start of the year, slid 3% yesterday to just above $US30 ($NZ35.70). Analysts said the product news fell short of some of the most optimistic predictions.