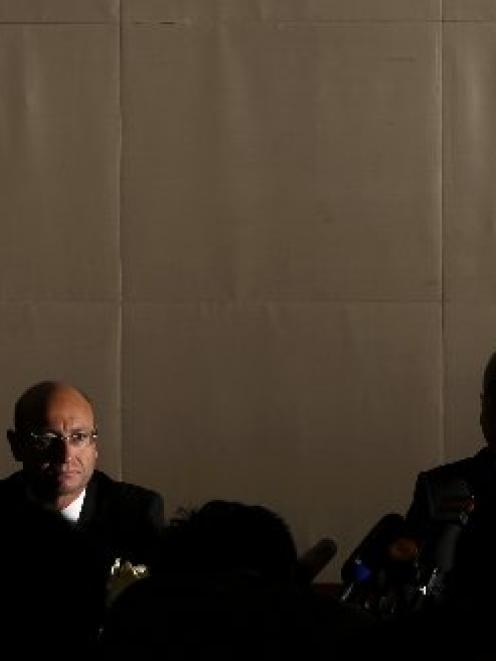 In a separate development, Chinese authorities have imposed a $900,000 fine on Fonterra over pricing practices in China.

The debacle began on Saturday when Fonterra went public with news it had found the bacterium, which can cause botulism, in three batches of a whey protein concentrate.

Fonterra's chief apologised to consumers and the New Zealand public at a news conference in Auckland yesterday on his return from China.

He said all contaminated stock had been contained.

Over the past few days, Fonterra, regulatory authorities and Fonterra's eight customers had located and secured products that were not in the market, and where they had already reached retail shelves, initiated recalls, he said.

Mr Spierings said after talks with Chinese authorities he was satisfied the situation there was stable.

All contaminated stock had been contained and there was now ''little or no risk'' for consumers, he said.

''Like I said in China, I do apologise to the consumers and to the public for the anxiety and distress that this has caused.''

Asked if he would resign, Mr Spierings said: ''That's not up to me, it's up to the board.''

''It's likely the Government will call for that as well ... and we welcome that.''

At a Ministry for Primary Industries press conference yesterday afternoon, acting director-general Scott Gallacher said two batches sent to Australia had been contained in a warehouse, while another two were released for distribution in Hong Kong.

He said a product recall had been issued and the ministry was working with representatives in Hong Kong.

Questions were asked in Parliament yesterday about the length of time taken by Fonterra to tell the Government about the contamination.

Fonterra had suspected the contamination since March and had gone about testing, but did not let the ministry know until August 2, two days after the testing confirmed it. The contamination occurred because of ''human error''.

A temporary pipe in Fonterra's Hautapu plant, in Waikato, had been ''cleaned insufficiently''. Mr Gallacher clarified the issue yesterday afternoon, saying the ministry and AssureQuality, a commercial company fully owned by the Government, had found out on the same day.

Fonterra greater China and India president Peter Wickham said yesterday Fonterra had been issued a $900,000 fine by the China National Development and Reform Commission (NDRC), after its review of pricing practices on consumer dairy products in mainland China.

''We accept the NDRC's findings and believe the investigation leaves us with a much clearer understanding of expectations around implementing pricing policies ... ,'' Mr Wickham said in a stock exchange statement.

ASB chief economist Nick Tuffley said the 2.4% fall was a ''moderate decline'' and in keeping with the normal volatility of the fortnightly auction results, Westpac was holding its forecast of Fonterra's milk price for the 2013-14 season at $7.40kg ms ''for the time being''.