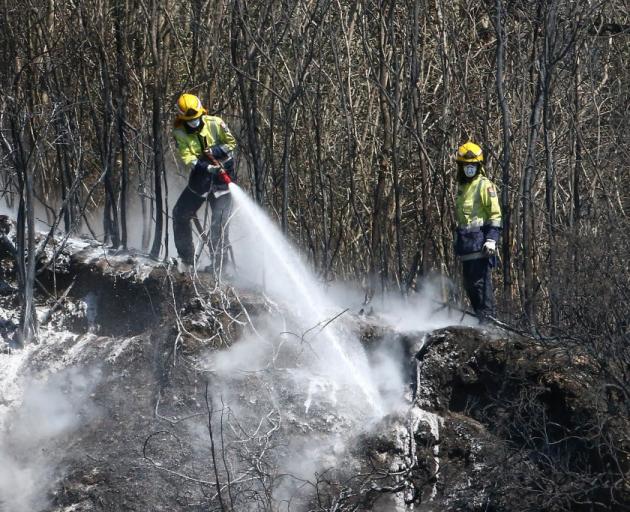 Firemen try to cool down smouldering land at Walters Bluff in the Tasman District. Photo: Getty Images
A total fire and equipment ban in the Nelson area has put up to 240 forestry contract workers out of jobs and closed two sawmills, with more closures threatened. 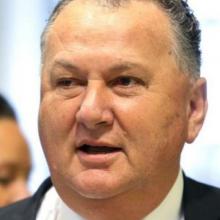 Forestry Minister Shane Jones said today that industry sources estimate the cost to the sector of lost production and earnings is $2 million a day.

About 1900ha of plantation forest is within the fire perimeter and expected to have been affected by fire.

Jones was expecting to have more information about the exact area, age and condition of the forest by Friday.

The fire and equipment ban is preventing forestry crews from working in forests outside the fire perimeter, he said.

“The impact is on the whole forestry supply chain as logging and silviculture are halted, affecting sawmills, wood processors and log exports. This affects around 1500 people across the region,” Jones said.

The two sawmills that have closed have insufficient logs to operate.

Across the region, other sawmills have enough logs to work until the end of the week and are then expected to shut down, Jones said. This was not a direct result of the fire but because of the fire and equipment ban across the whole region.

About 30 forestry crews in the Nelson region have been stood down, affecting an estimated 210-240 contract workers.

The cost per crew was about $10,000 per day in wages and overheads, Jones said.

Affected employees can apply to the Ministry of Social Development/WINZ for financial support for loss of livelihood. This will be asset and means tested and is not available to employers and companies, Jones said.

The extent of business continuity insurance among affected companies and logging contractors in the region was not known.

Forestry industry members and Ministry for Primary Industry staff have met with the Ministry of Civil Defence and Emergency Management (MCDEM) to discuss access issues and whether the fire and equipment ban will allow any work to start outside the fire perimeter.

“We understand the ... ban has 48 hours to run at which point a decision will be made to extend it or alter the conditions,” Jones said.

There is potential for industry outside the fire perimeter to start limited work under a special code protocol, which would put stringent controls on activities, hours and safety conditions, including a requirement for public liability insurance.

The industry estimated working under the code would allow operations at about 80% capacity.

The forestry industry was working with MCDEM to replace section 91 prohibition with a set of conditions under which limited forestry, agriculture and rural activities could recommence in the next 48 hours, Jones said.

Once it was safe, access to forests within the fire perimeter was needed to assess salvage potential.

Salvage needed to be carried out within one month before affected wood deteriorated, insects colonised the wood and any residual economic value was lost, Jones said.